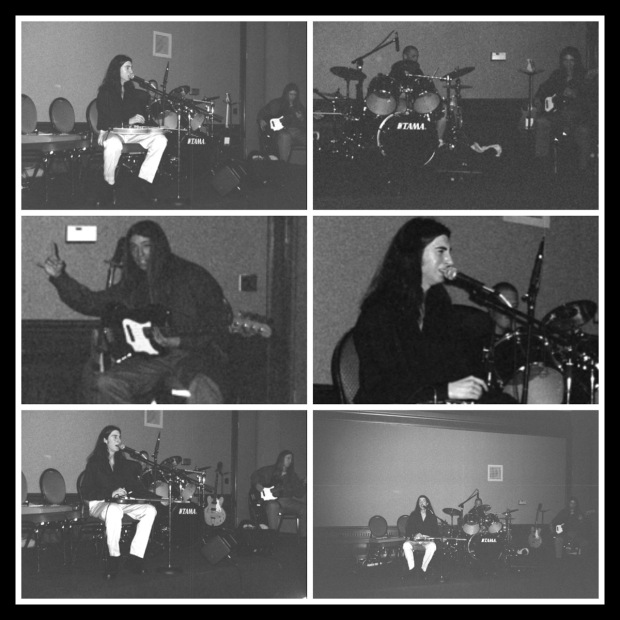 I once had a band. The name of that band was Guys with Dicks. It was meant to be an immature joke so I could have an excuse to call the first album WITHOUT DICKS and laugh about it softly to myself. I didn’t feel pressed to come up with anything better because I didn’t think we would ever turn into anything serious. Ten albums of original material, a few “greatest hits” type compilations, and a collection of out-takes later, I still couldn’t for the life of me come up with any other name that felt appropriate. We were stuck with our gender and our genitals.

I’ve covered some of the story/history/herstory throughout the album pages for the CDs we recorded, found on the sidebar off to the right. And it isn’t yet wintertime, so the snow hasn’t made me all nostalgic for GWD days gone by. It isn’t the one-year anniversary of either our formation or our demise. Still, I decree that this day of this year — but not any other year — shall be Guys with Dicks Appreciation Day.

Really, I just finally have some video to share that I’ve been meaning to put up here for well over a year and-a-half now. Tyson has (or at least had at one time) a ton of footage he shot of us in the studio and elsewhere that would make for a fantastic homemade documentary of that time, the music we were making, and the people we were, but I never got around to getting him to dub me a VHS copy of what he had. And now that he’s living in Prince Edward Island, that ship has probably sailed and sunk, never to be exhumed.

As heartbreaking as that is for the three people who would want to watch a documentary about the weird not-quite-rock group I once had when I was a teenager (and you have no idea how much I’d enjoy putting something like that together if it were possible), I do have this footage of us playing together for what turned out to be pretty much the last time, at one of our only live gigs. We broke up just as we were finally going to take what we were doing behind closed doors and bring it out into the world while honing our live chops.

Maybe the universe was trying to tell me something. Something like, “Don’t play live.”

Anyway. Huge thanks have to go out to Larry Girard — not only for helping me to digitize the battered old VHS tape so I could put the video up here, but for filming it in the first place way back in April of 2002 with the tiny bit of film he had left in his camera after the Clifton Grant Award banquet had finally spun itself out. Just think — if Ken Bondy had shut his hot-air-spewing pie-hole and stopped grandstanding a little sooner, we might have been able to get the whole eleven-song set on video. It wasn’t to be, and Ken is probably still spewing hot air wherever he is now to anyone who’ll listen.

At least we have these two songs on video. And at least I was able to capture most of the rest of the set on my mixer in audio form (though at less than ideal quality).

“Something About Lies” straight-up destroys the album version of the song. On CD it was one of the few times our “improvising everything out of thin air while recording” ethos led to a performance that didn’t quite cohere. This is about as close as we got to ballad territory back then. Rehearsing for the show put us in the strange position of having to teach ourselves songs we’d improvised and never really returned to after that, draining some of the surprise out of them in the process. But this was one song that benefited in a big way from being tightened up.

My voice is a little distorted and the sound quality isn’t perfect, but it’s better than the audio I “professionally” recorded sans-video. And I didn’t think to hit the record button until the second song, so it’s a good thing the camera caught what was probably the best performance of the night. I can’t get over how young I look without any facial hair. Based on this evidence, if I shaved it off today I’d probably look like I was twelve years old again.

“Mean It” doesn’t stack up to the studio recording, and it gets a little muddled at the end. Part of the blame rests with being forced to rework the end of the song. I couldn’t scream my guts out the way I normally would since we were playing at a dinner banquet for an audience of people several times our age. I did get to let loose more later on, because before long just about everyone had left and there wasn’t as much of a need to play it safe anymore. The banquet lasted more than an hour and-a-half longer than advertised (thanks again in large part to that shithead Ken), so people were tired and in no mood to stick around for the live entertainment. The whole thing is a long story I won’t delve into here. Suffice to say it was not the ideal gig for us.

Hey, at least we got this video footage out of it.

With “Mean It”, I thought I would synchronize the video with my own audio recording for better sound quality. Larry got in closer with the camera for this one to get some better shots, and as a result the sound suffered a bit and the drums kind of overpowered everything else. My audio is an improvement, but it’s still very flawed. My voice is now really distorted, though the overall mix is more balanced than what the camera’s mic captured. Check out Gord’s fingers dancing all over the bass. You even get a full-on guitar solo from me, though it’s far from my most blistering work. There’s some pretty aggressive guitar-playing squirreled away on those old GWD CDs, with me trying to strangle the instrument and let loose as a “lead guitarist” in some ways I haven’t really touched on since.

To give you a better indication of what we were doing around that time when we didn’t need to tone it down (while still not providing you with one of my more unhinged guitar moments), here is what remains one of my favourite tracks off of STELLAR, our last full-length album. It’s very much an R-rated song, or maybe even NC-17, so be prepared. I’m still not quite sure why I gravitated toward such graphic sexual imagery when I was angry back then.

The whole thing was improvised while recording as usual, complete with the introductory “interview” bit, though Tyson was able to talk me into breaking my usual “no overdubs” rule to add a little bit of vocal harmony after the fact. The sound quality isn’t even close to what it would be within just a few months. It’s dark and muddy. But that’s always seemed appropriate to me, given what was going on in and around my head at the time. I wasn’t in a happy place. It wouldn’t have felt right if I tried to make happy music.

Still, as ugly as some of the work that came out of that time is, somehow I can enjoy listening to it now. I’m glad I was honest about what I was thinking and feeling, and glad I chose to channel it into the music I was making, whatever I happened to be feeling, whenever I happened to be making music. I listen to something like this now and barely even recognize that guy. It almost doesn’t sound like me. It’s a far cry from what I’ve been doing in recent years, that’s for sure. I wonder how the people who are only familiar with my recent solo work would react if I reissued some of this stuff. Hell, everyone else remasters and reissues their back catalogue. The problem is my back catalogue is so bloated, if I started that kind of project I might never finish.

Maybe that’s a task for someone else to tackle posthumously, making at least sixteen dollars off of my music after I’m gone. I can totally hear that song working in a car commercial…can’t you?