Bree sent me some pictures she took at the Mackenzie Hall show. Here are a few of my favourites. 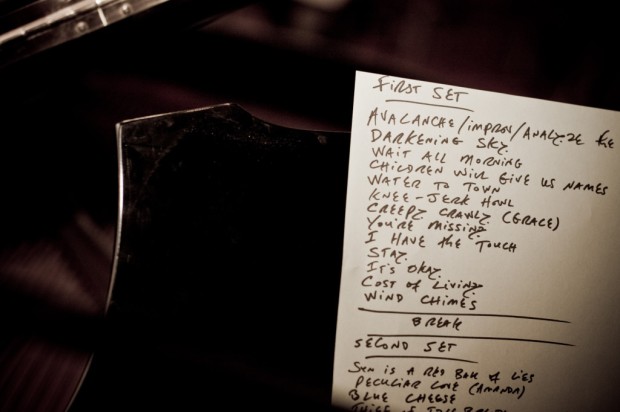 Here you see a bit of the setlist I ended up shuffling and playing fast and loose with.

Elliott, in his role as piano-dwelling good luck charm, where he remained all night.

I ended up barely playing this guitar at all. Shame on me.

It ain’t a show without some bugle.

Water to the left of me, bugle to the right — here I am playing piano for you.

I’m always blown away by the pictures Bree takes. She makes it look so effortless when she’s snapping them, and then I see the images she ends up capturing, and I think, “How the hell did you do that?”

It also has to be said: Elliott is pretty photogenic. I think he’s gloating over it. I really, really like that first shot of my glasses and the harmonica holder Travis let me borrow resting on the piano bench. There’s something about the composition that just grabs me. The image has hands.

I still sound like a cross between Leonard Cohen’s illegitimate son and a bullhorn. It’s starting to get a little old now. I’d kind of like my old voice back, please…

On the bright side, writing that big thing about Harry Nilsson earlier in the week led me to pull out Nilsson Sings Newman for the first time in a very long time. I don’t think I fully appreciated what a great album it is until just now. What Harry does with Randy Newman’s songs — the vocal nuances, the way he uses his voice as orchestration, and what he does with his own instrumental overdubs on organ, guitar, percussion, tack piano, and marimba — is nothing short of brilliant. They almost become whole new songs in Harry’s hands.

That guy was something else. I read he added so many vocal tracks to some songs, five people had to work the mixing board simultaneously in order to get the right fader moves.

That’s ten hands. That’s nuts. That’s what life was like before Pro Tools.