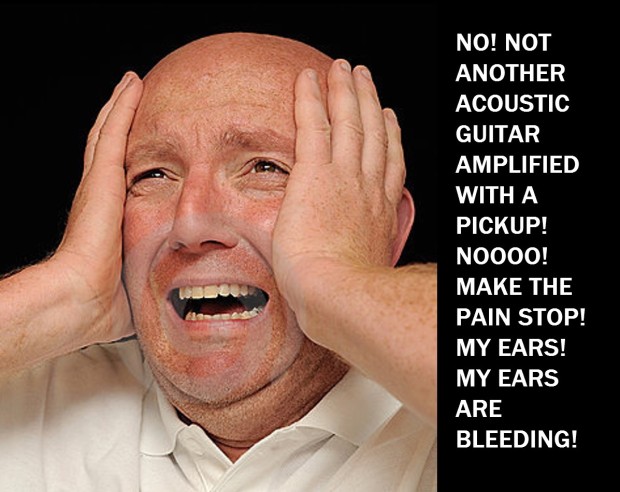 I’ve never been a big fan of acoustic guitar pickups. The only ones I’ve heard that sound halfway decent are insanely expensive, and they tend to be some sort of system where three different pickups are used in sequence along with a lot of EQ in an attempt to approximate something resembling authentic acoustic guitar tone…and they still don’t come all that close.

When it comes to playing live, a pickup is usually an unfortunate necessity if you’re going to play acoustic guitar, unless you’re in a very controlled, low-volume environment. Using a microphone — even inside of the guitar itself — is a feedback nightmare waiting to happen if you want to have any hope of hearing what you’re doing in the monitors.

But when you’re in a recording studio, you’d almost never even think about recording an acoustic guitar with anything other than a microphone or several in front of it, unless you were aiming for a specific effect or a less natural sound. I can think of a few exceptions offhand where the acoustics were recorded with pickups and it suits the song — “One” by U2, “Laid” by James, “On Your Own” by the Verve — but I would still argue sticking a mic in there might have sounded a bit better in all of those songs and helped the music breathe more.

Of all the acoustic guitars I own, only two have pickups, and that’s only because they came with them built in. These are guitars I don’t play often. I doubt I would ever go to the trouble of having a pickup installed in any of the guitars that do see a lot of action these days — the thought of drilling a hole in my 1945 Martin 00-17 almost makes me a little nauseous — and there would really be no point, given how rarely I play live. If I’m going to be playing in a high volume setting, which is something I try to avoid as much as possible, it makes more sense to me to play electric guitar and be done with it.

This didn’t occur to me when I was sort of the lead musician in the short-lived Tara Watts band Tara now likes to pretend never existed. All my guitar parts on About Love were played on a six-string banjo, and none of the electric guitars I had at the time seemed to like that banjo tuning a whole lot. Trying to get them to cooperate introduced intonation problems that were difficult to work around.

After a while I got my hands on a 1950s Kay Thin Twin that likes this tuning just fine and has more or less been living in it for the past two years. But by the time that axe was in the picture, the band was soon to be defunct, and I only got one chance to use it live.

I tried mic’ing the banjo live once, for authenticity’s sake. That didn’t work out well. Feedback nightmare.

I didn’t like the idea of having a pickup installed in the banjo, because I knew it would sound tinny and lifeless. A funky old Kay acoustic guitar happened to find the banjo tuning agreeable (what is it with Kay guitars from the 1950s being so friendly?). I decided the best course of action for live gigs would be to stick a pickup in the sound hole of that beast and electrify it.

I still have the cheap Dean Markley magnetic pickup I bought way back in 1999, but that wasn’t going to cut it. Low output. Shitty tone.

So I went out and bought this thing — a DiMarzio “Super Natural Plus” magnetic pickup — plugged it into the grunty old Paul tube amp, and that took care of the problem. 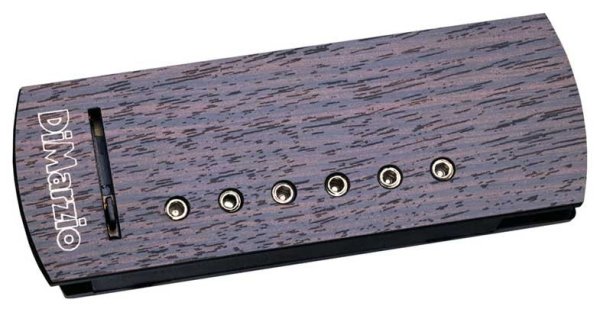 In hindsight, I wish I thought to mess around with effects. A bit of reverb and delay might have made for some nice dreamy sounds to fill things out a bit more. I guess I was still pretty much a “plug straight into the amp and don’t mess with it” guy at the time, and aside from engaging the amp’s built-in tremolo circuit once in a while I played effects-free.

After my stint as “pseudo-lead guitarist in someone else’s band” came to an end, my new friend Mr. DiMarzio was put away and seldom seen again.

Now it’s found a second life as an unexpected secret weapon on the new album.

When I was neck-deep in the process of writing and recording this stuff, I got the random thought to grab a cheap Washburn acoustic twelve-string guitar I almost never play anymore. I think the last time it showed up anywhere was on “Abandoned House Burning Down” (on IF I HAD A QUARTER).

It’s not a great guitar by any means, and it isn’t the most comfortable axe to play, but every once in a while it has a shining moment. I put it in a bit of a weird unresolved open tuning, and within about ten minutes a song had written itself.

It’s probably one of my favourite things on the album. I think it’s one of the highlights of the live set I’m in the process of putting together with Liam and Dan. If I hadn’t grabbed that unremarkable guitar on a whim, it wouldn’t exist at all.

Funny how these things pan out.

So, I was recording this song. After getting down the basic acoustic tracks and the vocals, I was trying to figure out what to do with it. Since one random idea deserves another, I thought I might slide that DiMarzio pickup inside the twelve-string and see what happened. It took a long time to find Mr. DiMarzio there, but eventually I tracked him down, dialled in some delay/reverb/phaser goodness, plugged into the Fender Twin, and off we went.

A few tracks of electrified acoustic guitar later, the song had a whole new layer of atmosphere to it that made it a whole lot more interesting.

The key when using this pickup, I’ve found, is not even trying to make an acoustic guitar sound like…well…an acoustic guitar. It does a pretty decent job for live use, as far as magnetic pickups go, without too much of the “quack” you tend to get from similar pickups. But when you use it to treat an acoustic guitar like an electric guitar, that’s when some really interesting things start to happen.

It probably helps that this pickup doesn’t make it sound like the tone is rolled off all the way once you get some distortion going. You can do a lot more when your base sound isn’t muffled coming right out of the gate.

My brain and fingers weren’t 100% awake when I recorded this little video, and it wasn’t meant to be anything serious or song-like, but at least you get a bit of an idea how much this twelve-string seems to like this pickup.