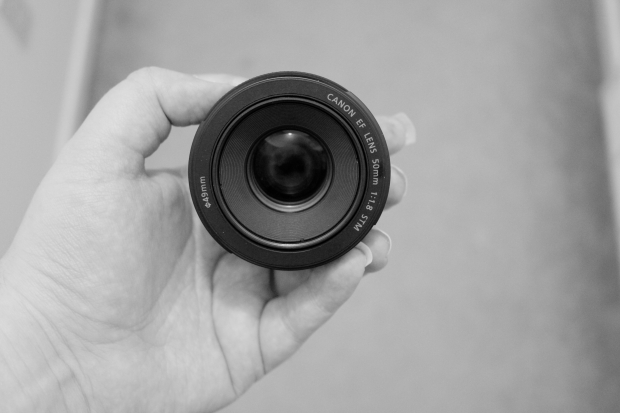 I just bought this thing — a 50mm Canon lens that’s been nicknamed “the nifty fifty”. For a year or two I’ve been talking myself out of getting it for one reason or another. I’m not a professional photographer, I doubt I’ll ever progress far beyond “bearded hobbyist”, and I don’t need an assortment of lenses for what I do…but it doesn’t hurt to have a second option.

That inescapable thought was what swayed me in the end.

For less than $200, this lens is insane. It isn’t a Zeiss Makro Planar, but it isn’t trying to be. One thing it allows you to do is blur parts of the image that are out of focus in a way that’s really pleasing to the eye. This effect is called “bokeh”. It’s also called shallow depth of field, but I prefer the idea of someone trying to say “bouquet” and sneezing at the moment of truth. Best of all, it’s fast, so it doesn’t mind low light situations.

Though this isn’t a great picture, it’ll give you a bit of an idea. The light in this room is far from ideal. Most lenses would either refuse to take an in-focus picture or laugh at me while ejecting themselves from the camera body. The nifty fifty didn’t care. The shot is a little grainy, but it has no business looking this decent given the lighting situation. Notice how the floor beneath the snare drum isn’t just out of focus in a conventional way — it has a creamy quality to it.

Sneeze it with me now: bokeh!

I’m just starting to play around with it, but I’m not feeling any buyer’s remorse.

There’s a learning curve here. With no zoom, you’re forced to move around and really think about composition. I’m not sure how much I trust the autofocus when it comes to still images. I’m probably going to have to get more comfortable using manual focus to get the most out of this lens.

These are good things, and they’ll lead to better, more artistic pictures.

Even so, the nifty fifty has given me a new appreciation for the kit lens that came with my Canon T5i (an EFS 18-55mm zoom lens). Everyone craps all over this thing and says you can’t take good pictures with it, but for my modest purposes it’s been great. The autofocus is fast, quiet, and almost never seems to hunt. The image stabilization allows me to shoot video handheld without things getting too jerky. It isn’t amazing in low light, but it sure beats the pants off of the Pentax point-and-shoot of yore and shoots much cleaner, deeper-looking video than my Flip friends. It’s never prevented me from getting the shot I wanted, and sometimes that zoom really comes in handy.

My point is, it isn’t the glass in the lens, but the lass and her hens. Wait…that’s not right. Ask not what you can do for your camera, but what your camera would do if forced to watch Samurai Cop on an endless loop. No…that’s still not it.

Eh, you get my drift.

(Seriously, go watch some clips from Samurai Cop if you want to collapse in a bewildered fit of animal laughter. It has to be up there with The Room and Troll 2 in the pantheon of the most hilariously bad films ever made.)