By now I was showing Gord and Tyson constructed songs instead of just a riff or two for us to improvise around, though most of the lyrics were still improvised while we were recording. The sprawling weirdness of SUBLIMINAL BILE was a distant memory. If we’d been able to keep it together long enough to finish a full-length album, it would have been the grungiest, shortest, sharpest album we ever made.

It all fell apart before more than an EP’s worth of songs could be recorded.

After STELLAR, we messed around with the placement of the drum mics some more. Through a variation of the two-mic method employed on SUBLIMINAL BILE and the first half of GOOD LUCK IN THE NEXT LIFE we were able to get the drums sounding better than they ever had before. It’s too bad only a handful of our songs got to benefit from it.

There’s the “low fat” version of this album, which contains only the A-grade material. Then there’s the expanded edition, featuring quite a few outtakes separate from any of the stuff found on CONDOM MINTS.

I would recommend sticking with the short version unless you’re a completist. But there’s some interesting, amusing stuff to be found on the overweight edition. the genesis of Red Eyeshadow can be heard in the form of Wired, though the inspiration isn’t really there in any of the three takes. The stoned mini-session is kind of funny, if you’re into stoned mini-sessions. You get to hear what Cottonmouth might have sounded like as a band vehicle. And you get to experience the hilarity of Tyson staring through my snare drum during Potential Intro to Cottonmouth, oblivious to what’s happening, not even realizing he’s playing along with us.

The four proper songs that make up the “low fat” version are where the real substance lives. They point the way forward to something that was never fully realized. I’ve often wondered just what this “lost album” might have been as a full-bodied thing. I probably would have come up with a different title if it had been a full-length, instead of the joke that brings things full circle after our invisibly-endowed beginnings.

But I’m getting ahead of things. Back to the four songs that started something we never finished.

There Is No Us manages to squeeze a marathon song worth of rage and spite into less than five minutes. It starts out sounding like it could be a ballad before exploding into one of the most intense songs we ever recorded and what may be the most impassioned vocal performance of my life (I think it’s a toss-up between this and “I Feel Great” on STELLAR).

It almost didn’t happen at all. It didn’t look like Tyson was going to show up that night in early February. Gord and I got tired of waiting around after a few hours. We took off to shoot some pool, smoked a magic cigarette, and then stopped in at Tim Hortons to drink some tea. When we were getting close to calling it a night, my dad walked into Tim’s and told us Tyson had just shown up at the house.

Back at home the pot was wearing off and we were tired. It was getting late. We only had time to dig into one song out of respect for the neighbours and their kids, who were probably asleep already. I played Tyson a few new ideas I’d been kicking around. He latched onto this one thing I envisioned as something like a Sunny Day Real Estate song. I even had a bridge section worked out where I tried to sing like Jeremy Enigk in mellow mode (we didn’t end up using that part).

I didn’t have any lyrics written, but the music was all there. It took a while before I was able to communicate to Tyson what rhythm I thought the “chorus” section should be played in. It felt like it was best served as a 6/8-against-4/4 thing. Eventually we were in good enough shape to start recording. The first take broke down halfway through. The second take was better, but I had no idea what to sing. After a handful of uninspired lines I started chanting, “My words are shit,” over and over again.

Tyson thought it had potential. “It was fine until you started singing about your words being shit,” he said.

He came up with the idea of starting the song with the sound of drum resonance, with me hitting the record button right after he smacked the toms. I felt completely drained by now and didn’t think anything worthwhile was going to happen. We tried a third take.

And then somehow I was able to dig a little deeper, and all of this anger came pouring out. The relationship I started using as inspiration on SUBLIMINAL BILE was over (it was already on its way out during STELLAR, but now it was dead and buried), and the end wasn’t pretty. I didn’t think I had many songs left in me that mined the same vein. I’d been singing about that one fragile, troubled relationship for three albums running. I didn’t want to keep beating my head against the same wall forever. So I took what I might have put into a whole album and packed it into one song.

As with “I Feel Great”, I was ready to end the song before Tyson felt it had run its course. He got that same intense look in his eyes, mouthing for me to keep going, so I said, “Gord, one more,” forgetting to mute my vocal mic when it was mixing time — you can hear me say it in the middle of the song — and we pulled it together one more time for a sludgy ending. I turned what would become the song’s title into a mantra. It felt like an ending. There was a certain amount of weary relief in that.

When we were finished, Tyson said, “That’s one of the best songs we’ve ever recorded.” I agreed with him. I think I still do.

Beautiful High might not have the same heaviness of mood, but the music is even more aggressive, with an ending that almost sounds like grunge polka. The lyrics aren’t about any particular drug. I was thinking more broadly, about how the harder drugs I was becoming interested in were romanticized by a lot of people, but for those who weren’t careful and didn’t have a whole lot of self-control the romance wouldn’t last long. Mixed in with that was something of a twisted love song, eroticizing the whole thing on two different levels. There’s the person singing the song, who finds something compelling in the person he’s singing about and what she’s doing. And then there’s the subject of the song, who’s pursuing the “beautiful high” but isn’t prepared for all it entails: “You’ve never felt like this/You never will again.” The feeling might be powerful, but it won’t last — and is the comedown really worth it in the end?

On another level, I just wanted an excuse to sing about drugs some more, and I was really singing about myself.

Death to Johnny was an idea I recorded in “demo” form to show Gord and Tyson. Tyson thought it was great the way it was, even though I had no idea what to sing after about thirty seconds. I thought it was funny how I was singing, “Death to you,” to myself while the whole thing sounded buoyant and poppy. We tried turning it into a band vehicle. It never quite clicked. Seemed to work a lot better as the sketch it started out as. So I left it alone.

Red Eyeshadow is the last GWD song there ever was — a reworking of Wired that puts the original to shame and kicks mud in its eyes for good measure. It grew out of yet another confusing experience with an almost-girlfriend. It was kind of a harbinger of things to come on BEAUTIFULLY STUPID. Ten minutes before Tyson came over, she dumped me over the phone when I didn’t realize I’d attained a status from which I could be dumped. At least I had some good ideas to shove into a song after that.

Gord’s soon-to-be girlfriend Julie sat in on that session. It was the only time we ever had a visitor while we were recording. You can hear her say, “Right on,” at the end of the song. I like how Tyson says, “That was a weird ending,” and I wish I would have kept recording to catch a bit more of our banter at the end as I talked about how, when I stopped playing in the middle of the song and Gord didn’t come in right away like he was supposed to (prompting me to say, “Remember…bass…Gord…”), I thought we might have lost the take.

As it stands, I cut myself off mid-sentence, the EP ends, and maybe you could look at it as a pretty effective — if accidental — way of symbolizing the end of the band. We’re there, and then we’re gone. Poof.

Comparing this stuff to the three albums that came before is interesting. We almost sound like a different band altogether. The songs don’t ramble or wander off in search of themselves anymore. Which isn’t a good thing, or a bad thing. It’s just a thing. There are still rough edges and mistakes, but everything has grown more compact. These are much more like proper songs than the demented marathon pieces we were recording a few months earlier.

It’s impossible to say what the intended full-length album would have been, or even what it would have been called, but I think BEAUTIFULLY STUPID is a pretty good road map. Most of the songs on that album would have been GWD tunes if my bandmates had been interested in tackling them, and “Red Eyeshadow” acts as a bit of a bridge to where my solo mission was headed.

It felt like we were reaching the end of what we could do together even before everything imploded. Gord and Tyson didn’t seem all that interested in following me where I needed to go. Tyson decided he was the one who called the shots in the band now, and he would only allow me to audition new ideas when he felt like it (which was less often all the time). I wasn’t confident enough to stand up to him. Eventually I got tired of the whole thing and started recording on my own.

We ended up folding just as we were planning on playing a bunch of live shows to see how people would react to our music. I always found it funny how most short-lived bands maybe record one or two albums and then play as many live shows as they can, while we played two live gigs in two of the least appropriate venues possible for the kind of music we made and recorded about a dozen albums under the Guys with Dicks umbrella. We did everything backwards, and when we broke up no one outside of a small group of friends even knew the band existed in the first place. I guess some people would look at that as a failure. Me, I wouldn’t trade the music we recorded for any number of gigs or any amount of recognition.

At least we went out with a bang, even if no one was really around to hear it echo. That counts for something, right?

There Is No Us
Beautiful High
Death to Johnny
Red Eyeshadow

There Is No Us 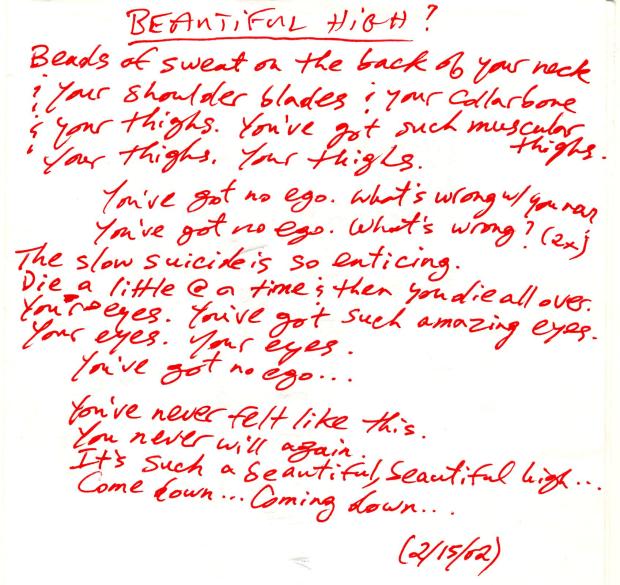