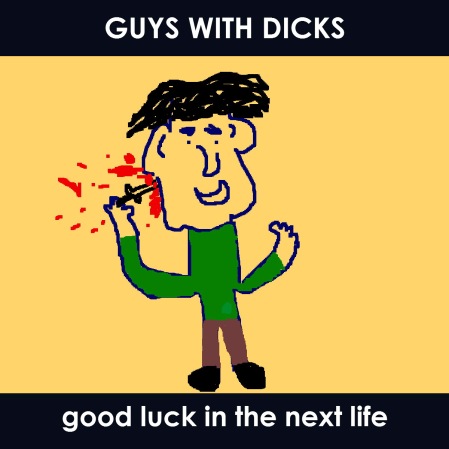 This is more varied than SUBLIMINAL BILE, and not near as consistent. But some good stuff does live here.

Hurt like It Should is one of our more interesting improvisations, with the time signature constantly switching from 4/4 to 5/4 and back again. It’s also home to one of my more intense vocal performances up to this point. There are two outbursts at the end pitched somewhere between screaming and weeping without quite becoming either one, coming off like some weird sort of feral howling.

It felt like I was ripping pain out from inside of myself while singing. Which I guess was kind of what I was doing, though the lyrics stayed pretty elliptical and vague for a change. The phrase, “You know what you did,” became a mantra, sung over and over again, as if I could exorcise the demons if I could just stab at those words until they felt my anger and confusion.

The rhythmic hiccups in the song came out of Tyson calling my attention to a part near the beginning of “Vicodin” on the last album where my guitar stuttered at will and followed a different rhythm from what he was playing on the drums.

“What if we tried to do something like that on purpose?” he said. “Only, instead of it just being something that happens once or twice, it kept happening through the whole song.”

It sounded like a good idea to me. Gord was an hour or two late showing up that night, so we had time to cook something up while we were waiting for him. For some reason the first thing that fell under my fingers was one of the prettier-sounding things I’d played on the guitar in a while. Tyson seemed to like it. By the time Gord showed up the seed of the song was already there, along with its rhythmic foundation.

Tyson brought over his camcorder to film the session (and I’d give a few of my least favourite toes to have that footage today). When we watched the video of this song later, after smoking a joint, it sounded to me like there was a harpsichord playing a decorative figure an octave or so above the guitar. I’m not sure where that came from. I’ve never been able to figure it out or hear it again. Maybe it was my brain’s addled way of telling me to overdub something along those lines. I didn’t, though Tyson suggested adding some vocal harmonies after the fact.

I tried. I also tried adding a bit of additional guitar. It just seemed wrong. The song felt better left untouched, the same way most of our music did. I did give some serious thought to breaking one of my unwritten rules and re-recording my two guitar solos. I had no idea what I was doing in the moment, and they sounded kind of uncertain to me, full of rough spots and bad notes.

I asked Tyson what he thought. “I like your solos,” he said. “They’re relaxing.”

So they got to stay, bad notes and all.

Eating My Own Waste is pretty upbeat for a song about LSD-induced hallucinations, germs, and defiance, with my guitar echoing in druggy ways and Gord and Tyson laying down some funky stuff. Songs like this make me wish I’d thought to experiment more with delay and other effects at the time. It would be a while yet before I would start to think of the guitar as more of a textural tool than a blunt instrument.

Gutter Trash is one of the most accessible things we ever did, and you could almost call it a straight ballad — lyrics about removing eyebrows with a corkscrew aside. It’s got a nice reggae-inspired lilt to it, even if it goes on for a minute or two longer than it needs to. I like the bit at the beginning with Tyson laughing and fooling around before he realizes we’re recording. Likewise, What Else? almost resembles a conventional rock song, with one of my best guitar solos on the album.

This time around a few of our improvisations don’t cohere as well as they did on the last album. The worst offender might be Asphyxiate. There are a few nice vocal harmony bits, and there’s a very stylish entrance from Tyson when the drums kick in, but there’s not a lot of interesting stuff going on inside the guts of the song. This time I really meant it when I said, “I got nothing.”

I kind of wore myself out with the first two songs that night, and what came out here felt like the ugly afterbirth of the venom I’d already spilled all over the place. I did make some pretty angry facial expressions, and Tyson later told me he was a little freaked out by some of them. But facial expressions don’t come across on the CD, and they weren’t enough to save the song from being subpar. Neither was an allusion to the Papa Ghostface classic “Don’t Go” (a far superior song to this one) near the end.

On the other hand, two of the songs I thought of as filler for years are now two of my favourite things on the album. Tonsillitis in a Vacuum doesn’t have much substance in the lyrics department, but Gord unleashes a monster of a bass riff that would be revived fourteen years later, my guitar-playing is as discordant as you could want it to be, and the instrumental interplay — complete with odd shifts in tone, dynamics, and rhythm — underlines the strange connection we had, where a lack of any rehearsal or written material didn’t stop us from improvising like we somehow all knew where a song was going…which just made it stranger, because we almost never had any idea.

Then there’s We All Get Off — one of the more aggressive songs here, taken at what may be the fastest tempo of any Guys with Dicks song ever recorded. It’s almost a punk song by our standards, and pretty catchy for the improvised slab of vitriol it is. The performance is one of our tightest on the album. There’s even a bona fide chorus in there!

Absolutely Perfect is at once one of our catchiest tunes and one of my filthiest diatribes. We were just getting up after that first night of recording, drinking, smoking, and filming goofy skits in the park. I was still half-asleep and my brain felt like it had a layer of motor oil gumming up some of the gears. I’m not sure how such a silly, offensive little song came out of the morning haze, or how I managed to sound like I was awake and alert. Too bad about one of the drum mics starting to vibrate at the end. That’s part of the reason the song fades out before an extended, unheard coda. This track is also home to one of the few instrumental overdubs on any GWD song — a brief synth part that comes in during the bridge section.

Something About Lies would be one of our best mellow tracks if it wasn’t for all the wrong notes. I guess that’s the price you sometimes pay when you never really rehearse anything. It’s still one of our best mellow tracks anyway. Gord looked comatose when we were recording it and was so wiped out he later claimed to have no memory of the session at all. In the video of our final live performance up there you can hear the song free of fluffed notes, the way it was meant to sound.

Blood at the Back has a nice smouldering buildup to its overdriven climax, which always made me think of a theme song or incidental music for a low-rent police procedural that never was. Gord plays some tasty lead bass while my guitar fills in most of the low end, and my lyrics make up what may be the weirdest and least appealing come-on I ever came up with.

Things end on another demented note with me seated behind the Fender Rhodes for Old Together. Where “Vicodin” indulged in a violent kind of madness, this song is more playful and nowhere near as lyric-driven. It was one of the only times I got to stretch out on an instrument with keys in the final phase of the band, and there are long instrumental passages that border on jazz, or at least as close to jazz as we could ever hope to get at the  time. I like the eerie repetitions of, “You know what you want,” and Tyson not being able to find his beer at the end.

Gord and Tyson thought the album should kick off with An Interlude — a little skit in which I act out the part of the host of a very family-unfriendly game show. They thought it was hilarious. I thought my little monologue was pretty lame and far from my best work. I kept it near the end of the album, because I felt Hurt like It Should was a much stronger and more appropriate beginning. It would have been too jarring, jumping from lighthearted silliness straight into unadulterated pain.

In the end I guess this sounds like a logical extension/progression of the sound we established on the last album. There’s still a lot of anger in the lyrics. I’m still often singing to or about the same person SUBLIMINAL BILE was inspired by. But there’s a marked drop-off in the sex talk. Where it does show up, it tends to be more tongue-in-cheek than before, with the exception of some ugliness in Asphyxiate. And there’s room for some moments that expand our musical landscape  — there was nothing like Gutter Trash on the last album, and Hurt like It Should finds a way to bleed without relying on any of my typical bile-spewing mechanisms, exchanging the obvious for a bunch of half-formed images that make little literal sense but somehow make emotional sense. The bit where I turn the word “really” into a cracked, elongated howl on the line, “You know it’s really what we feel,” has always been my favourite moment on the whole album, for whatever reason.

Hurt like It Should
Eating My Own Waste
Asphyxiate
Tonsillitis in a Vacuum
Absolutely Perfect
Something About Lies
What Else?
Blood at the Back
Gutter Trash
An Interlude
Old Together

We All Get Off