One of the stranger love/hate relationships I’ve had with an album.

The double CD HORSEMOUTH (& OTHER BEDTIME STORIES) seemed a little too freewheeling and unfocused for its own good, so I decided I would sit down and write the lyrics for every song on the next album I made with Gord. At the time, I was hellbent on keeping premeditation away from anything I recorded, leaving most of the lyrics I sat down and wrote on paper to collect dust. It was more fun to improvise and discover what the words to any given song were going to be as they were in the process of being sung.

Here I thought I’d mess with a winning formula. I would write a bunch of words, we would improvise some music for those words to sit inside of, and we’d have a Papa Ghostface masterpiece on our hands.

It didn’t quite work out that way.

This is a pretty mixed bag. The lyrics aren’t really to blame. There’s some pretty fun wordplay going on in some places, I think. The problem was my decision to fuse those lyrics with improvised music that was given no time at all to develop, forcing elements of spontaneity and premeditation to live together whether they wanted to be housemates or not.

It would take me until the next PG album to figure out how to merge those two worlds in a way that felt organic. In the meantime, a Digitech guitar effects processor and a real electric bass were added to the arsenal of sound-makers. That at least made things a little more interesting on a sonic level.

Compassion to Deceive is the standout track by miles and miles, and it’s a strange one — a genuine ballad, or as close as we were going to get to one in 1999. The lyrics were written in grade eleven math class to the tune of a Keith Sweat song I heard in passing before heading off to school one morning, if you can believe it.

It’s a rough performance, with some off-notes from both of us, and it probably goes on for a minute or two longer than it needs to. But there’s an odd sort of bittersweet tenderness to the whole thing, with a line like, “A polite look over the shoulder / Saliva on the window of fate,” coming off as weary instead of ridiculous. It’s one of the few places on the album where the words end up married to improvised music that feels like a perfect fit.

I remember recording it and being amazed how effortless it was, with the chords just falling under my thumb and Gord letting loose with those singing bass counter-melodies. The song title alone is still one of my favourite phrases I’ve come up with, and it’s got a gravity to it now that I couldn’t feel when I was sixteen.

There are a few other highlights in the shape of Yogamo (atmospheric weirdness with a bit of quasi-operatic vocal gibberish, some wicked bass playing from Gord, and guitar work from me that’s a noticeable improvement over anything I’d done on the instrument before), I Got My Hair Cut and I Thought About You (wherein Gord lays down some more ass-destroying bass licks and we both conjure an ominous atmosphere without using any words at all — my microphone was on, but I didn’t have any written words in front of me and felt awkward about improvising after sticking to the premeditated approach with the lyrics throughout the rest of the album), and the hidden track, unofficially called Guitars in Heat (just some atonal guitar noise, with me playing the unhinged “lead” guitar, but more interesting than some of the proper songs).

When three of the better tracks on an album that’s otherwise overflowing with words are improvised instrumentals, well…

Aside from Compassion to Deceive, this is more a CD of great moments than great songs: Gord’s kinetic mandolin playing and my brisk piano runs when Home turns into an impromptu little jig at the end; the chorus of An Unusual Obsession, where Gord’s guitar and my bass do things that shouldn’t work together harmonically, but for some reason they do; the end of the otherwise middling Nerve, which mushrooms into some disgusting noise completely at odds with the rest of the song; my guitar and Gord’s bass doing their little dance on Save Me, both of us offering up some of our best playing on the album; and the moment in the middle of We Was Dead when my headphones fall off and Gord starts laughing (about a year later, a complete reinterpretation of this last song would show up on the solo album CHILDREN HAVE NO EYES).

The moment it was finished I thought this album was some of the best work I’d ever done. I gave copies to classmate Jesse Topliffe and my grade eleven drama teacher Mr. Lewsaw, leading to an unexpected musical relationship with Jesse that would go a lot of different places over the next few years. As for Lewsaw, I’m proud to say I think I scared him a little.

I’m not sure why I thought this was a masterpiece at first. Now I hear it for what it really is — not a flat-out horrible album, and not the worst Papa Ghostface album (that distinction will always rest with LIVE AT SILVERS), but nowhere near what we were capable of at the peak of our early powers. When you boil it down, it’s one great song, a few good ones, and a bunch that never quite lift off. It feels kind of slight, which is weird for an album that’s a little over an hour long — though an hour was a little short by my usual standards.

I think part of what has always made it feel like such an odd album to me is the general absence of the fiery insanity that’s there to at least some degree on every single other Papa Ghostface album (even the supremely subpar LIVE AT SILVERS). As weird as some of the lyrics are, the music doesn’t take off on many unexpected tangents, I don’t do any screaming unless you count some of the growling on We Was Dead, and things don’t truly descend into madness until the weird little unlisted track shows up at the end of everything.

I remixed the whole album in late 2002, with mixed results (ha). Some songs benefited from being cleaned up. Home and We Was Dead came roaring to life once I got rid of all the mud and clipping. Versace Hump gained a little something as well. But Compassion to Deceive lost a bit of its soul when I decided to touch up my harmony vocal and strip the slap-back echo from my acoustic guitar (stay away from revisionist mixing, kids). So did An Unusual Obsession when I stupidly changed the effect on Gord’s guitar from “clean and shimmery” to “distorted and not shimmery at all”. Nerve sounded so much better in remixed form it almost made me re-evaluate the whole song, but it lost some of its charm without the hideous sonic mess at the end of the original mix (the result of some real-time, mid-mix delay feedback that was impossible to recreate).

A year or two later, I was thinking about re-recording the whole album with Gord from scratch. That never happened. Still, I couldn’t shake the feeling that the whole thing was a bit of a missed opportunity and with a little more time and effort might have stood a chance of being almost as good as I thought it was for about five seconds, before objectivity set in.

Time and perspective have done nothing to dull my affection for Compassion to Deceive, though. It’s still one of the best things Gord and I ever did together and home to some of my favourite lyrics I’ve written. That one’s going in the time capsule.

Shifting feelings and slippery songs aside, this album led to a fascinating conversation with Dustin, my on-again, off-again-until-he-decided-to-stop-acknowledging-my-existence piano teacher. After a lesson in late September of 1999, I played Compassion to Deceive in Dustin’s living room for him and another student named Ray. I felt a strange mixture of pride and embarrassment as we sat listening to the CD.

The two of them were reverent throughout, staying silent for most of the seven and-a-half minutes it took to listen to the track, as if they respected the music too much to talk over it. It was surreal. Ray said it made him think of Beck, which was not the sort of thing I expected to hear at the time. Then I handed Dustin a copy of the album, since I was still swimming around in my “this is the best thing I’ve ever done and everyone must hear it!” period of delusion.

He brought it up at our next lesson after having a chance to digest the whole thing.

“Let’s say some people came to see you play live, and they’d only heard this album and knew nothing else about you,” he said. “They didn’t know what you looked like or anything about your life, and they hadn’t heard any of the other music you’d made. What do you think they would expect, coming to the show?”

“I’ll tell you what I think. If I were one of those people, I would think you were a man, maybe in your mid-thirties, with a very dark past involving drugs, a lot of unhappy experiences, and some serious demons.”

I forget the rest of what he said, aside from complimenting Gord’s playing and giving me some advice about gain staging and trying to keep levels out of the red. But I found the whole thing flattering and kind of incredible. It astonished me that he would have these thoughts about this music, when there wasn’t one moment on the album that was even a little bit autobiographical or confessional. I visualized an audience gathering at a small venue, the place buzzing with quiet, intense anticipation. What would their reaction be when they were confronted not with a grown man, but a tall, skinny sixteen-year-old who played guitar on his lap, fretting with his thumb?

I didn’t get an answer to that question until I played my first Mackenzie Hall show eleven years later. By then I wasn’t a teenager anymore, and my guitar-playing was a little more evolved.

And as it turned out, Dustin’s description might have been better directed at the very next Papa Ghostface album. 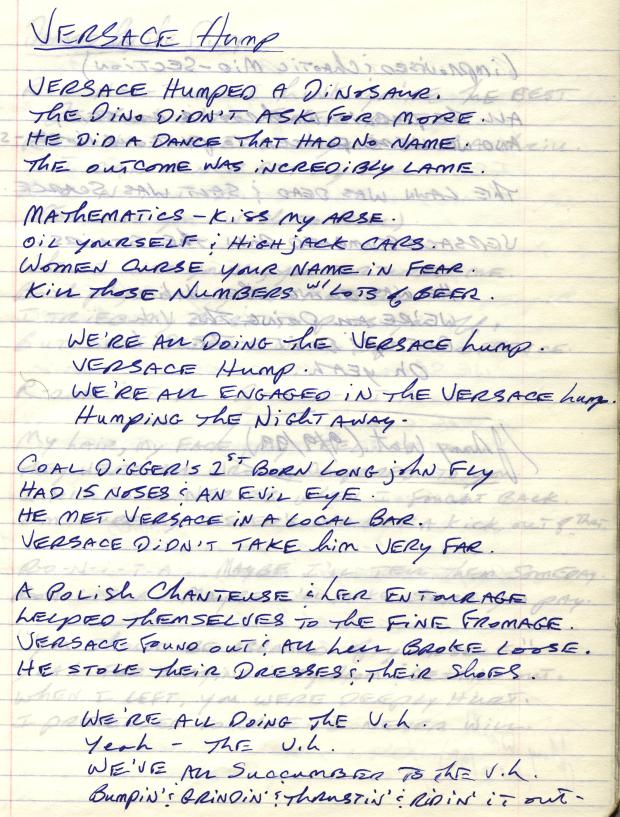 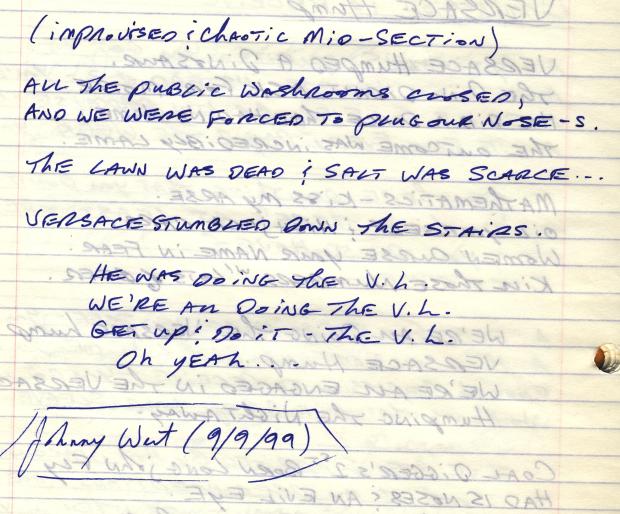 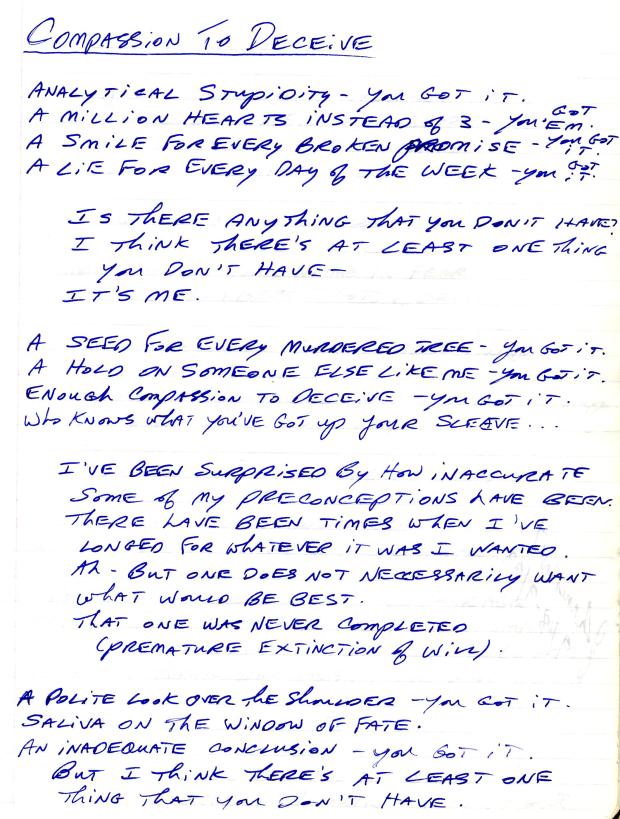 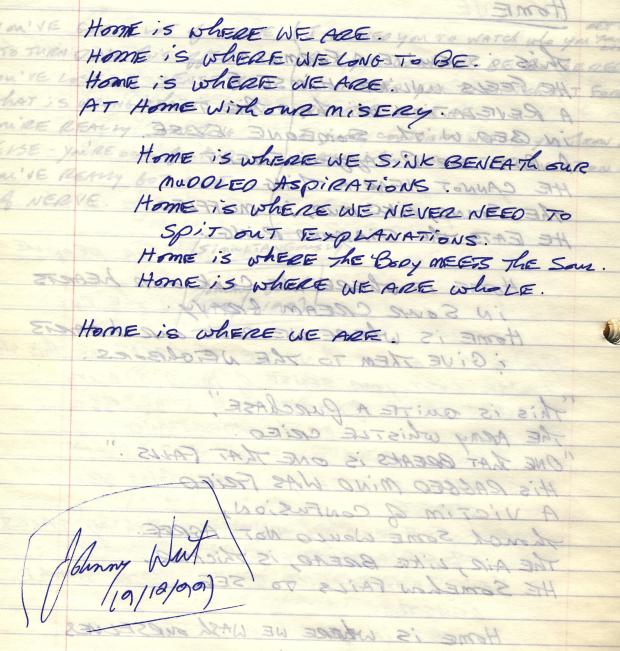 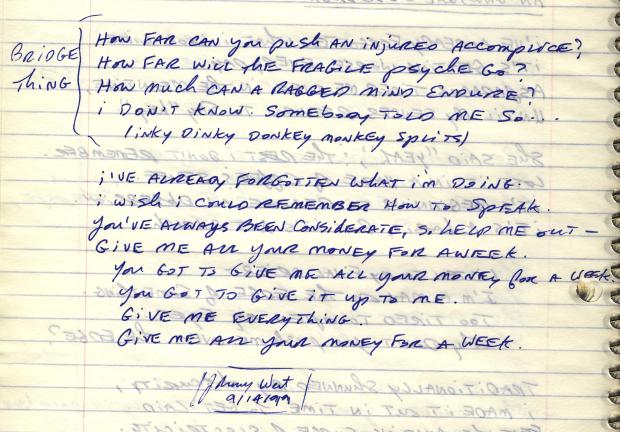 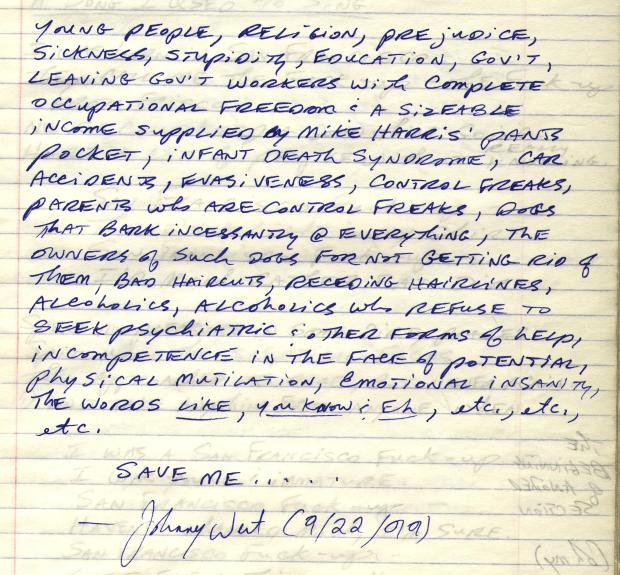 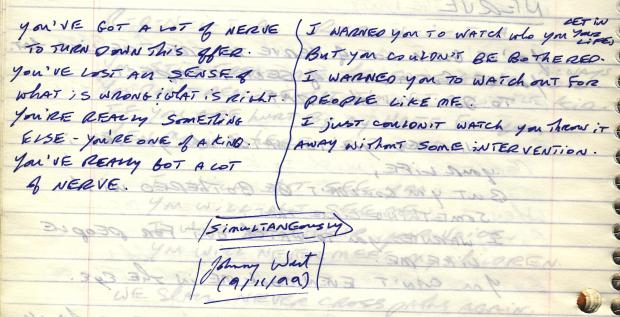