This was the first Papa Ghostface album in thirteen years — the first breaths of our second life collected in one convenient place.

I always hoped the old Papa Ghostface fire would start spitting out sparks again someday, but I wasn’t sure how realistic that hope was. It’s one thing when you’re teenagers and you have all the time and energy in the world. It’s a little different when you’re adults, one of you has a wife and little ones, and the other finally gets the facial hair he always wanted.

Our lives and music took us very different places after we finished recording a few careers worth of songs almost no one heard — and we did all that while we were still teenagers. Gord went off to form the long-running and long-evolving band Surdaster. I did my “making lots of restless music on my own” thing. There was no reason to believe Papa Ghostface would ever exist again in any meaningful way.

When I was first working out who to talk to about potentially playing and singing on the ambitious “solo album with guests” that would become YEAR OF THE SLEEPWALK, I thought I’d shoot Gord a message to see if he might be interested in doing a little messing around for old time’s sake. He wrote back with enthusiasm. Surdaster had just broken up, and I caught him feeling, as he put it, “Like a pimple filled with musical pus, ready to pop.”

Maybe sometimes these things happen when they’re supposed to.

We got together and found the near-telepathic musical connection we stumbled onto when we were high school sophomores was still there, undiminished. Jamming gave way to an explosion of ideas, and pretty soon we were making an album together — our first since 2002’s semi-posthumous one-two punch of the CASTRATED EP and the compilation-but-still-sort-of-a-real-album that was KISSING THE BALD SPOT.

The recording process was a bit of a stop-start affair. That had a lot to do with recurring sleep issues on my end. It wasn’t all bad, though — it gave the album time to shape itself into whatever it wanted to be, and I think it’s a better piece of work for being allowed to marinate in its own juices for a while. We got rid of the things that didn’t feel like they were quite up to par and shaved the roughage down until we were left with thirteen tracks that felt like they belonged together.

If PAPER CHEST HAIR stood for some time as the closest thing to a “mature” Papa Ghostface album as made by our then-sixteen-year-old selves, this is the real deal — PG older and wiser, without quotation marks.

It probably goes without saying that the production and sound quality are a little better here than on our earlier albums. I had better gear, and I knew a little more about how to use it by now. We’d both grown into better, more well-rounded, more confident musicians over the years. That helped too.

There are no twenty-minute chunks of molten psyche packed into music here. There’s no twisted role-playing (well, almost none), no larynx-obliterating screams, no trying on a different vocal persona for every song. But it wouldn’t be a Papa Ghostface album without at least one ominous spoken word detour. Gun to the Temple fills in that piece of the puzzle with its glass-three-quarters-empty world view, odd sounds (sampled vocals and backwards glockenspiel among them), and a gloriously filthy guitar solo from Gord that comes screaming out of the speakers like it staggered in from another song.

(My own filthy guitar solo shows up one song later, at the climax of In the Name of the Impostor, if you were wondering.)

There’s a cohesion to this album that was missing on some of the more scattershot CDs of yore. There’s still a fair bit going on, though, and the album title is meant to acknowledge that the gumbo isn’t lacking in variety.

Speed the Truth is some airy dreaminess that just might be the child of SHOEBOX PARADISE’s lead-off track “Don’t Go”, gentler and less long-winded than the father, and with more depth of sound. Winter Porch is something like our take on loping, slow-motion bluegrass. Fly’s Hive is semi-industrial sludge that coughs up a clean, jazzy groove halfway through before swallowing it back down and shitting it out as sludge again.

Remorse Code is the sound of what might have happened if Barry White went to hell, smoked a bowl, and took up the ukulele. It’s the one thing that does fall into the old “inhabiting a character while the song is improvised out of nothing” category, albeit with a focus that wasn’t always there in the past. The hilarity of an all-out improvisation like this being the only song on the album with a proper chorus isn’t lost on me.

Hiraeth and Samhain are ideas we’d been kicking around for years with acoustic guitars, given a few fresh coats of paint here to become something like progressive alt-folk, for lack of a better non-description. Songs like Situations and The Devil Wants His Car Back, meanwhile, were described by cover artist Greg Maxwell as having an “acid western” feeling to them.

Speaking of Greg, his cover art was a complete surprise. I didn’t give him much direction, only asking if he might take a crack at creating something psychedelic that incorporated imagery from some of the songs. What he came up with isn’t really psychedelic at all. It’s beautiful, stark, and somewhat jarring. But if you spend some time with the songs, I think the skeleton of a bird on a desert ocean floor starts to make a lot of sense.

It looks like the cover of some great, dark, existential graphic novel that’s going to give you nightmares. I love that.

I always wished I’d been able to get Gord to sing on more of our songs. When he stepped up to the microphone some strange, interesting things happened. All of the singing on this album is coming from me, outside of a brief group vocal moment at the end of “Fly’s Hive”, but in every other way this is probably the most collaborative thing we ever did by quite some distance.

In the past it fell to me to take care of the lyrics most of the time, whether I was writing them or improvising them as we were recording. Around the time of PAPER CHEST HAIR I started showing Gord finished songs for us to mess around with, to supplement the well-worn “improvise around an idea or hit the record button with no idea what we’re about to do” songwriting ideology. This time around some of the lyrics were two-man efforts, written on my porch, the two of us throwing ideas back and forth while strumming acoustic guitars, and a song that began as Gord’s or my idea was often overflowing with additions from both of us by the time we were finished with it.

There’s still a lot of improvising going on. But it sits inside of the music more comfortably now, and there’s nothing here that takes half an hour to find itself.

For the first time on any Papa Ghostface album there are guests. Only two, but they make their contributions count. Ted Hogan adds all kind of hazy alto sax goodness to Speed the Truth. And Stu Kennedy’s violin is the star of the show on A Question, a Thought, a Confession, building to a denouement that never fails to make the hair on the back of my neck stand up.

I love the insanity of a lot of our old music, as raw as some of it is. I wouldn’t have written as much as I have about that stuff on all these album pages if that wasn’t the case. But some of the things on this album are so far removed from anything we were doing or anything we could have attempted back then, I almost can’t believe the same two guys responsible for all of that made this. We wouldn’t have had a clue how to do something like The Same Starless Sky the first time around. That one was much more lyric-heavy to begin with until Gord suggested chopping out a lot of the words and leaving large sections of it instrumental. Doing that opened the song up and made it a lot more effective, as it became more of an impressionistic thing that wasn’t so clear in spelling out what it was about.

Another thing that strikes me about this album is how dark it is. I don’t think that’s a bad thing by any means. I’ve always liked swimming around in murkier subject matter, and there was never a dearth of that on earlier Papa Ghostface albums. But this time around there’s a distinct lack of goofiness throughout. The closest thing to a silly moment is the truncated multi-tracked count-in before The Devil Wants His Car Back kicks in. Instead of weird sex and spandex-wearing Muppets, you get meditations on fate, faith, solitude, betrayal, madness, and hypothermia as a metaphor for time robbing you of the map that leads back to the person you love.

This was the first Papa Ghostface album most people ever heard, and the first one that was given anything resembling a proper release. As points of entry go, I’m not sure you could do much better.

Speed the Truth
Samhain
Winter Porch
Situations
Movin’ on Loon
A Question, a Thought, a Confession
Fly’s Hive
The Devil Wants His Car Back
Remorse Code
Hiraeth
The Same Starless Sky
Gun to the Temple
In the Name of the Impostor 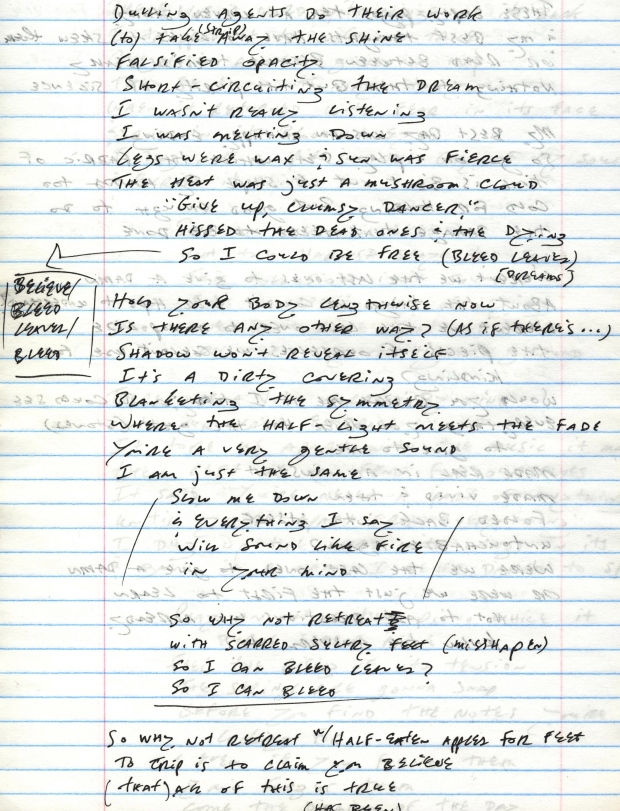 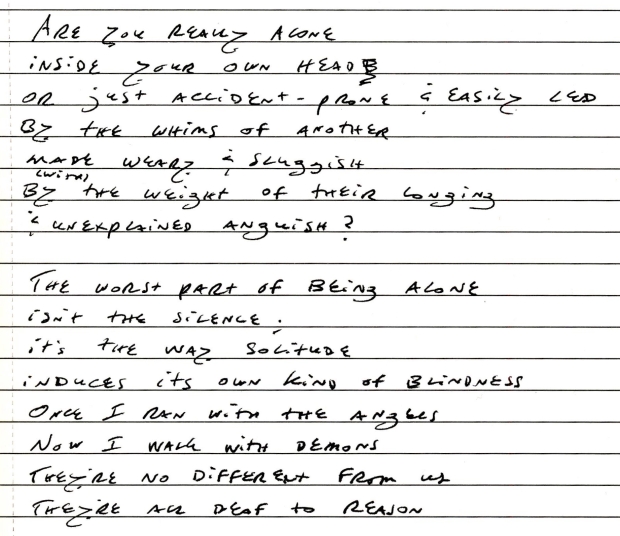 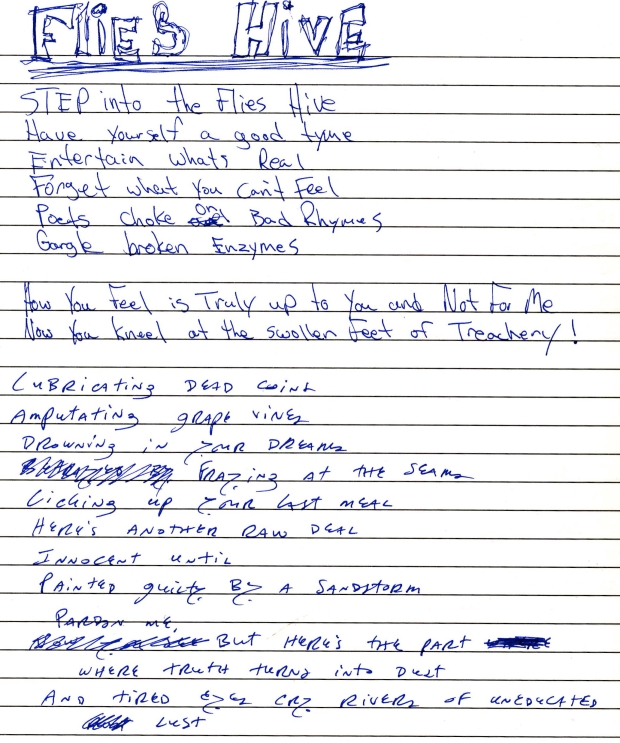