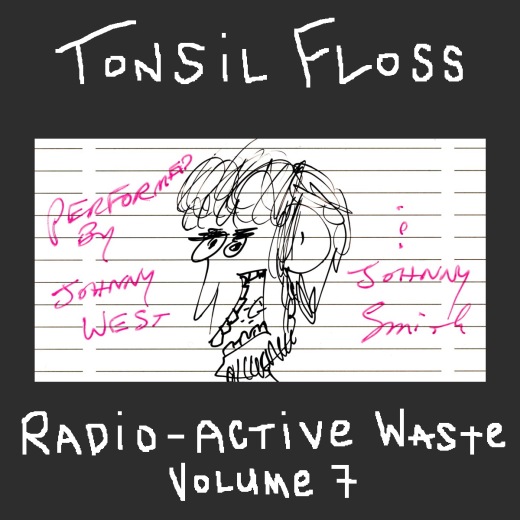 The culmination of all those old Radio-Active Waste tapes.

The whole thing started with an idea Johnny Smith had in late 1997. We’d been recording albums on cassette tape at a rate of one every week or two since sometime in 1994, and things had become a lot more serious than they once were, mostly because I was putting a lot of pressure on both of us to make great music that no one would ever hear.

He suggested trying something separate from the proper albums. He would play the synthesizer on every song — which wasn’t something he normally did much of, even though I tried to talk him into it — and we would improvise like we always did. But things would be looser and more random, and we wouldn’t even try to come up with anything brilliant. We would just mess around and see what happened, with no pressure. He even had a name for the music that would fall under this new umbrella: Radio-Active Waste.

After one or two tentative sessions everything fell into place and we developed a system. I would play “bass” with my left hand and “drums” with my right, using the most realistic keyboard sounds I could dredge up. Johnny Smith would coax eerie sounds out of a synth. I would sometimes pause from my drumming duties to play synth as well, and we would take turns singing.

There were “movements” as opposed to songs, with something like a twenty-minute piece of music uninterrupted but broken into several different sections, like a movie changing scenes. Sometimes there were smooth segues. Other times a change would come without warning. Often there was a theme that connected the movements, and sometimes a storyline would emerge and run all the way through. Occasionally only one of us would sing a particular movement if we really had some good ideas or the other just didn’t know what to sing.

Things got dark in a hurry. Part of that was because of some of the weird sounds Johnny Smith was making on the synth. there were lots of lyrics about paranoia, death, drugs, insanity, and other such things. Meanwhile, I was fourteen at the time and didn’t know a thing about any of that stuff (with the exception of paranoia, which I was well versed in from my time with the ex-family).

There were six volumes of Radio-Active Waste recorded on cassette tape here and there over a period of about a year, usually in-between sessions for our other, “normal” albums, most of them two hour cassettes. All told, there were one hundred and thirty-five songs/movements between them. In addition to the individual movements being titled, most of the larger pieces from which they were drawn were given blanket titles based on the themes that would emerge from within.

I’m not sure what inspired the idea on the Smithster’s end, but it was just the creative shot in the arm we needed, taking the pressure off at the same time it inspired some of our most vital work in ages. Our music had been growing more conventional as I became a better musician, introducing more structure into our improvisations while putting more effort into dressing up the songs with my Clavinova’s auto-accompaniment modes to create the illusion of a proper band. With Radio-Active Waste, all of that went in the garbage and things got weird again.

By the time we got to the fourth volume, I started using a different tape player with a real microphone connected to it instead of a stereo with a built in mic, and the sound quality improved in a big way. The darkness started to give way to silliness. By the time we were finally able to make a Radio-Active Waste album on CD, the dementia had all but taken over.

I christened the disc “New Waste” volume one, but there were to be no future volumes for quite some time, as i threw myself into Papa Ghostface and no end of solo work.

Here, then, is the last Radio-Active Waste Album to date (though that might change soon), and it isn’t much like any of the other work we did under that umbrella. While I’m still playing the “bass” with my left hand and the “drums” with my right, there are long passages of songs that feature no bass or drums at all, with me playing piano or something else instead. And the ability to overdub allows me to harmonize with Johnny Smith and my own voice in ways I never was able to before.

Maybe the most notable difference from earlier volumes is the relative absence of movements in the traditional Waste style. Most of these are standalone songs. They’re all pretty lengthy (the shortest track is seven minutes long), but they’re still self-contained. There are, however, a few bits at the end of songs that are complete curve balls, not unlike some of the between-song moments on YOU’RE A NATION.

“New Waste” seems to have been a fitting secondary title after all, because this was new territory for us.

Suicidal Sausage was recorded the day before the ROMAINE NOGGIN EP, so Johnny Smith sings about the impending family reunion, and we both sing about how orange food is good for your reproductive organs. But that’s during the orchestral midsection. The rest is pure dementia that has no real frame of reference.

World Is Flat is almost entirely drum-free, with me playing a recurring drone on electric piano while Johnny Smith and I trade lines and sing on top of each other. JS does some of his best work on the CD here, vocally, lyrically, and on the keys. He spins a long and complex tale, while I mostly stick to background interjections, responses to his words, harmonies, and bizarre one-liners.

Ping Pong Testes is absolutely insane, with JS making tremulous goat noises while I scream like a chicken and we mutilate Rod Stewart’s “Do Ya Think I’m Sexy?”, turning it into something pitched halfway between opera and dance music.

On the Walkway is the one thing I’ve always had mixed feelings about, and it’s also the closest thing to a conventional/accessible tune on the album. I get a good groove going and a nice fat drum sound, but I don’t think my singing really works. I was in the middle of a period of idolizing a fellow artist and felt like I had to prove myself, because I thought he was in a league far above me in terms of singing and songwriting ability. I failed miserably, and my singing is way too overblown here. But the rest of the album probably would have given him nightmares, so it’s all good.

On most songs Johnny Smith is the straight man to my nutcase. We didn’t plan it that way. I just found myself singing in weird voices and making up strange lyrics most of the time.

Sparky Fart Lighter brings it all back home with a tribute to the fragrant little dog who inspired the climax of DON’T TALK LIKE A BABY highlight “Shoot Him in the Head”. I use the phlegm in my throat for a Tom Waits-like sound before it sadly clears itself and leaves me on my own. So I do what any sensible person would do and respond by taking the song into doo-wop territory, before ending with an unrelated song fragment that disgusts JS to the point of taking off his headphones and starting to walk out while I’m still playing.

I should have brought this CD into CJAM during one of my appearances on Actual Air and played a track or two for Chris. It’s pretty wild stuff. 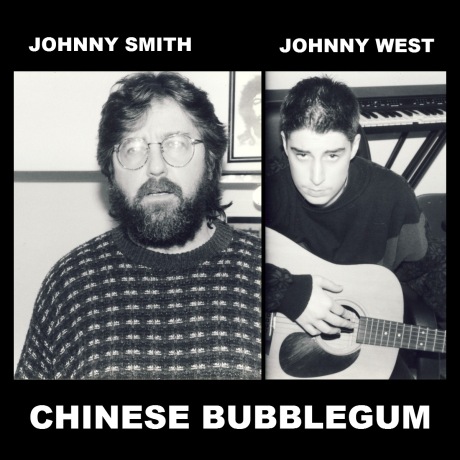 And here are two out-takes from the TONSIL FLOSS sessions.

Fuming isn’t all that great, though it has a redeeming moment when I stop the song, change the music completely, and start singing about furious masturbation. It began as an attempt at revisiting a riff that already got its definitive treatment on Radio-Active Waste Vol. 6 (the Animals in Love tape) when it became “Take Me to the Zoo”. I liked that bass riff and thought maybe we could shape it into another cool little song, but the inspiration wasn’t really there. I think it was recorded the same night as “Ping Pong Testes”, so we redeemed ourselves in a hurry.

The title track, though…that one is sort of brilliant in a warped way, even if I didn’t realize it at the time. It harkens back to the old-school Waste approach, with no less than seven different songs stuck inside of one fifteen-minute track. It’s also the only Waste song ever to feature me playing real electric guitar and not a synthesized one.

First up is the Underground movement, complete with some wobbly bass and suitably unhinged vocals from me, some of which are delivered through a pretty messed up effect on the Digitech guitar effects box, sounding more like a guitar than a voice.

Then there’s a sitar/guitar rumba, with more insane singing and probing lyrics like, “I had long legs like the guy who had long arms.” I was already convinced the session was going nowhere and didn’t think I had any good ideas, so I just ended up vocally pissing all over everything while Johnny Smith played it pretty straight. Somehow this has the unexpected side-effect of making the music even better than it would have been had I tried to sing in something approaching a normal voice.

Next comes a little piano ballad called Falling All Over, sounding like something Randy Newman might have written during a stay in a mental hospital.

After that we have what I’ve always felt is the high point of the suite: The Rooster Came out of the Television Screen. It’s less than a minute long but feels epic as hell, with me lamenting the rooster’s lack of testicles while harmonizing with myself singing a refrain of, “Paw, paw, paw.”

The Rabbit Was Big and He Was Fat is similarly bombastic, with Johnny Smith cracking up when I start goofing off while he’s trying to sing seriously. The Smithster has a bit of a spotlight number of his own on Numbers, which is sort of free association math set to some odd piano chords from me, until I punctuate a moment of silence with a belch/laugh and end it all with some spastic instrumental piano.

We went on to record “Sparky Fart Lighter” about five minutes later, but time has revealed that this out-take is probably the superior track. Fortunately I dumped it onto a CD instead of erasing it forever as I did with so many things I thought were cast-offs back then, and now future generations will be able to bask in the glow of its insanity.