How did a quasi-stop-gap EP, with half of its tracks glorified out-takes and the rest cast-offs that didn’t fit in anywhere else, turn into one of the best short-form things I’ve done? Your guess is as good as mine.

The last minute or so of Judas Goat and all of Fidget still feel like two of my finer moments. The rest isn’t too shabby, either. I think I even prefer this treatment of Skinny Ditch to the original found on WHO YOU ARE NOW, though my singing was probably a little more polished and committed the first time around.

This wasn’t a CD I intended to make. I wasn’t planning on putting another EP out so soon after the PAVEMENT HUGGING DADDIES EP, but there were a few songs I’d recorded that I knew weren’t going to fit on any of the full-length albums I was marinating in my brain (several of which never got past the marinating stage, as it turned out). I didn’t want to throw the songs away, so I thought I’d try throwing them together, along with a few other thingsIi wanted to get out of my system.

I also thought this might serve as sort of a lead-in to the serious change of direction I felt coming. I was saving myself for some new equipment, and that was the main thing holding me back from extending things into full album territory.

The synth kick drum “loop” on Judas Goat was played manually in real-time. I recorded the initial synth part to a click track on the mixer, only to discover after the fact that when I made a loop on the synth it didn’t sync up with my mixer’s idea of the same tempo. I had no choice but to play the kick drum part with one finger all the way through the song, without the convenience of playing it once and looping it. That was pretty funny.

The song itself is the only synth-based thing on the CD. It feels like a pretty big shift from anything on GROWING SIDEWAYS or WHO YOU ARE NOW, though I’m not sure how to explain why. It’s at even more stripped-down than those songs (which is saying something), and at the same time somehow richer. That ending, with its backwards electric guitar and processed vocals, isn’t like anything I’d ever thought to try before.

I’m not normally one to rework my own songs after they’ve been recorded to my satisfaction, but in January of 2005 I was putting together a set list for a solo gig — the only one I played between the Guys with Dicks dinner banquet fiasco in 2002 and the first Mackenzie Hall show in 2010 — and I thought it would be interesting to give the synth-based Skinny Ditch a different arrangement for electric guitar. It gave me an opportunity to finally put to use a guitar riff I’d been sitting on for about five years. It was supposed to be part of a song called “The Story”, written circa CHILDREN HAVE NO EYES, but I never got around to finishing it. I also worked up a few new songs for the show, one of which was an instrumental guitar piece improvised around a few melodic ideas (Ambient Guitar, since I couldn’t think of anything to replace the working title).

I didn’t plan on recording either of these things. But the more I mulled over what I was going to do with songs like Viverrine that didn’t have anywhere to go (that one was recorded during sessions for WHO YOU ARE NOW but never would have fit in on that album in a million years), the more I thought they might make sense with the other homeless tracks. Of the two, Ambient Guitar is closest to its live incarnation, though the last section isn’t played as smoothly as I would have liked. I think my fingernails were a little too long for their own good that day.

Skinny Ditch Redux is the only place real drums show up on the whole CD, and they sound about a hundred times better than they ever did before. Tyson helped me put new heads on the toms and kick drum not long before I recorded that song. I’d left the factory heads on since I got the drums in the summer of 2000, never realizing the kit had more potential than those shitty Tama heads allowed it to realize. With Evans G2s, suddenly the toms had body and sustain like I’d never heard before, and the kick took on a whole new life.

So, of course, I didn’t change those heads again after they were worn-in. At all. Ever. Well over a decade later, I’m still hitting those same G2s.

Fidget was one that surprised me. I threw it together in a few minutes after sitting on a few half-written bits for a while, taking what pieces I had and improvising the connective tissue while recording.

I didn’t think of it as much more than filler to pad out the EP. The song had other ideas. I ended up spending more time on it than any of the other songs — messing with different sounds like handclaps and warped synth marimba (neither of which made it into the final mix), recording a fake Wurlitzer part and then trying to duplicate it note-for-note on piano when it became clear fake Wurly wasn’t quite the right sound.

By the time I was finished triple-tracking most of my vocals, it was starting to sound like one of the best things I’d done in a long while. I never saw it coming. It kind of took on a life of its own — as if the song said, “You think you can just spit me out and forget about me? We’ll see about that.”

It changed my whole view of the EP. All at once it didn’t feel like a tossed-off collection of misfit songs anymore. It felt like it was just what it needed to be. In some strange way, an improvised mantra of, “She gone, she gone, whoa-oh-oh,” feels like the best climax there could have been, and the vocal triple-tracking would soon become something of a signature sound for me (starting over HERE), though I had no idea at the time.

I guess it’s a good thing I made this one count, because it ended up being the last short-form musical statement I would ever make. Lucky for me, the songs knew where they were supposed to end up all along, even when I wasn’t so sure myself. 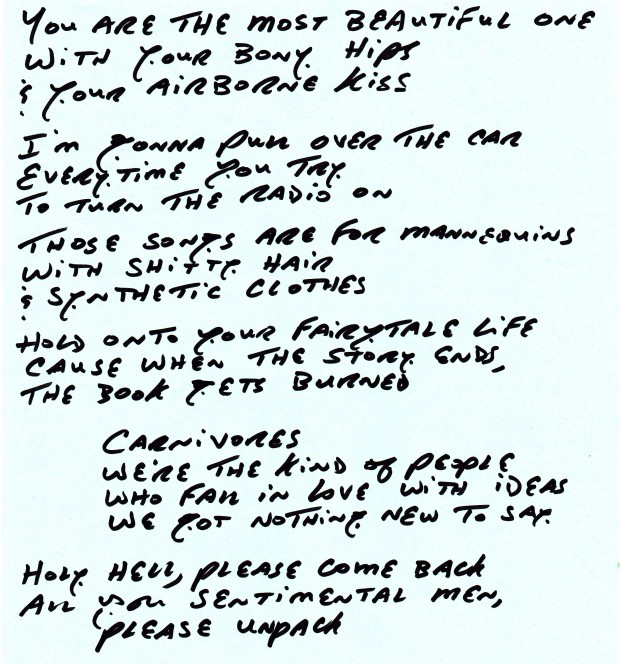 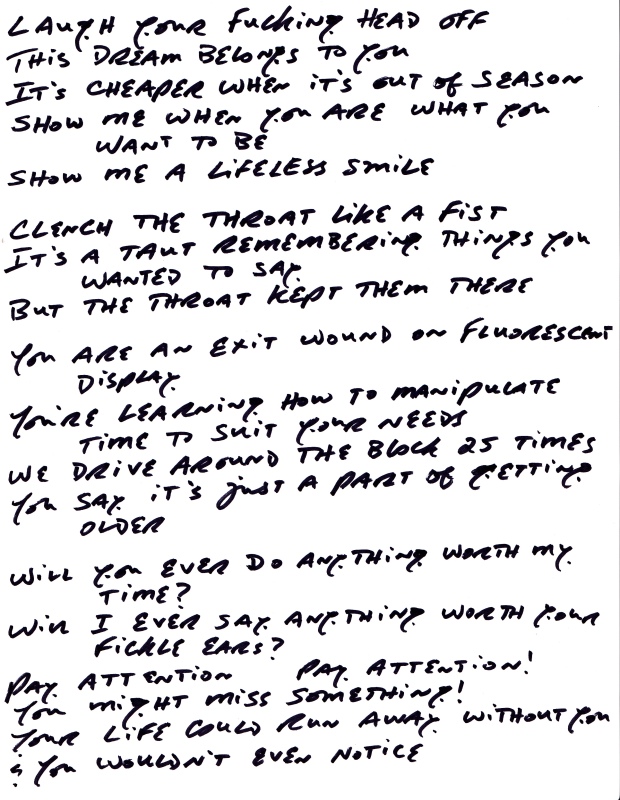