This was first envisioned as a Mr. Sinister project without the other half of Mr. Sinister. I toyed around with using that ethereal female vocal effect on a few songs. For whatever reason, it didn’t feel right. I was stuck with my natural voice.

This time I was going for a different sound — quasi-electronica, sort of, but more concentrated on atmosphere than chasing any sound that was contemporary or cool. It was music with more importance placed on the bass part, to the extent that it sometimes was the first thing I recorded and it dictated where a song went. In any other setting, the bass is almost always something I leave until after the guitar or piano has been recorded, working in sort of a lopsided inversion of the standard build-it-from-the-rhythm-section-up method, leaving the parts most people get down first for last or near-last. A new effects processor also played an important role here, allowing me to treat my voice with delay and reverb in ways I never could before with built-in digital mixer effects.

This was a pretty radical departure for me. I was all about keeping things organic for years, outside of some digital piano and the occasional synth/organ flourish, and suddenly here we have The Revenge of the Synthesizer. Only two songs feature live drums and a few brief flashes of electric guitar. All the other noise is coming from a neglected Yamaha W-5 synth.

The music is heavily improvised throughout, though most of the lyrics were written, usually after the music was recorded. I tried to keep things pretty stark, and I think I managed to inject some of the weirdness and spontaneity that felt like it was missing from OH YOU THIS. I wanted to get as far away from that album as possible. Taking a more serious stab at something resembling electronic music than ever before seemed like as good a way to go as any other.

To my ears, Surprise, Sunrise, Turpentine all on its own kills just about everything on OH YOU THIS, and the messed up “organ solo” in the middle of the song is one of my favourite moments on any album I’ve made. I’ve always had a thing for that song. It felt like I tapped into something new and exciting that wasn’t like any other place I’d been before. The song kept changing shape and passing through different scenes, but it always felt like it was right where it needed to be, and there was a dark, claustrophobic atmosphere that never seemed to leave.

I think it’s an atmosphere that carries over to the rest of the album. There’s always been something kind of cold about this collection of songs, at least for me. I don’t know how else to put it.

The lyrics for Green Ribbon Hippopotamus came from an attempt at free association writing, where you just put pen to paper and keep writing without giving any thought to what you’re doing. I’m not sure how successful it was, but the drum loop still stands as one of the more demented things of its kind I’ve concocted, and the lyrics are pretty messed up, with a bizarre return to sexual imagery that comes straight out of left field.

There are quite a few instrumental tracks. I tried to record vocal tracks for some of them, but they all seemed to open up when the words were gone. The best of these songs is probably Pictures of Lillian — a slinky mid-tempo groove that follows the same unchanging bass line for a little over six minutes while organ, electric guitar, and various synth sounds appear and disappear. There’s a pretty tasty one-handed drum fill on the snare and toms early on. No way could I have done anything like that a few albums back.

Eggshell Embryo has to be one of my more successful stabs at something that sounds somewhat like proper IDM, with Reticent not too far behind (though there’s almost a weird skeletal hip-hop thing going on there, with some spoken word elements creeping in as well). Saturday Night at My Favourite Dive is probably the catchiest thing on the CD, so of course there’s an F-bomb in the middle of that one. And Merapi used to fill me with a strong desire to shake my ass, which isn’t something any of my music tends to do to me. It was all about the moment when the drum loop got a lot thicker after being slathered with delay, kind of becoming the lead instrument.

This album got me some unexpected airplay on CJAM when I gave a few CDs to some random DJs. I was already past the point of trying to get anyone interested in the noises I was making, so it was more of an experiment than anything. Angela Desjardins decided to give it some attention on her show Braille Radio. I think she was the only person who gave me any serious airplay at the time. She misread the title as Nudge You to Death. I thought that was kind of funny, and later nodded to it in the song “Touch Me to Death” on GROWING SIDEWAYS.

This was the first CD of mine that looked something like a proper album instead of just a CD-R with my handwriting on it. I was getting more interested in the visual representation of my noise, and I was surprised to learn how easy it was to get things looking borderline professional. The packaging was still pretty bare-bones, but it was a definite step up from the last album.

Overall, I felt this was the best thing I’d done since BEAUTIFULLY STUPID, though the two albums don’t really have anything common. When that other half of Mr. Sinister heard it he said the music made him picture me “in a goth dance club, playing digital folk tunes for vampires”.

I kind of liked that image. Still do. 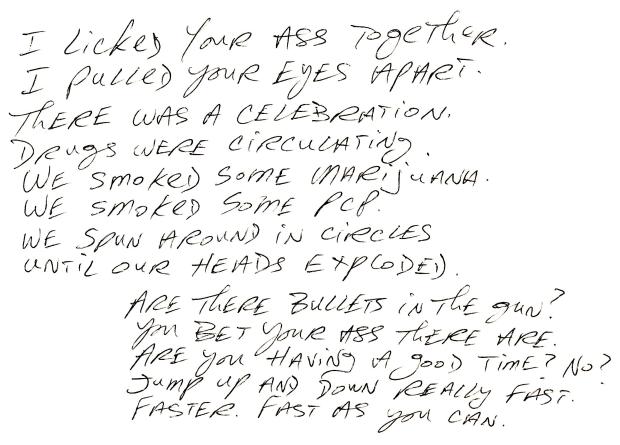