This is the definition of “stopgap release” right here.

After some months of confusion brought on by having too many songs and ideas and not knowing what to focus on, I decided I would work on an instrumental CD. I had some ideas that weren’t going to work with lyrics. It made sense to get them out of my system before throwing myself into all of the other songs that needed to be addressed.

A few tracks in, I recorded a long, improvised piano piece I called Emily in Montreal. I liked how it turned out. And then I found myself playing the piano just about every day, which wasn’t something I’d done in a long time.

Time would sometimes melt away into nothing. One night I sat down and messed around for what felt like about five minutes, only to discover once I got up that I’d been playing for an hour straight. The initial improvisation of Emily in Montreal was more than half an hour long before I decided to record it and make it a little less rambling.

I thought I would record a few songs and then move on, but the ideas kept coming every time I sat down. I ended up scrapping the original instrumental CD idea (which was going to be guitar-heavy) three songs in and concentrating on the piano instead.

What it turned into was the closest I’d ever come to jazz up to this point, though I wouldn’t go so far as to call it anything like that. I’m nowhere near being at the level of a jazz musician, and I would get a lot jazzier in later years once I got a real acoustic piano. It’s more like the musical equivalent of a narcoleptic evening drive or something.

It’s never quite felt like a proper album to me, though it’s long enough to be one. Even all these years later, I’m still not sure what to say about it. The media broker I’d been working with to replicate my CDs and make them look presentable since NUDGE YOU ALIVE botched the first and only run of discs, which cast a bit of a pall over things, similar to what happened with WHO YOU ARE NOW… the year before. I ended up having to copy the CDs myself, just like old times.

I’ve been copying and printing the CDs myself ever since. 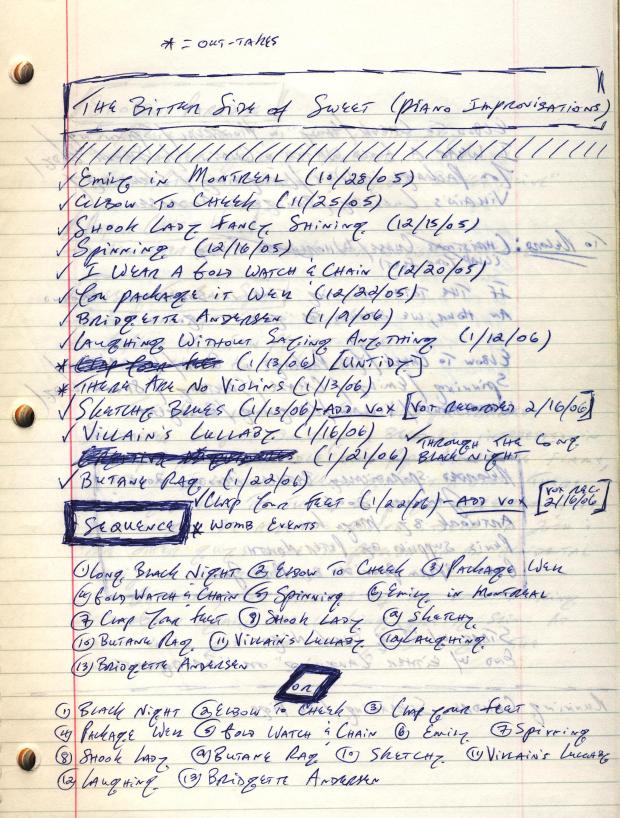 Few and far between though they may be, there are at least a few things here that I think rank up there with my best work, chief among them Exit Train Left — a moody little vignette that explodes out of nowhere into some intense wordless wailing — and Bridgette Andersen, which is by far the simplest thing on the album but feels like one of the most effective pieces. It’s one of the only places where there’s something interesting going on with the sonics, with some thick modulated reverb from a new, sexier effects processor almost becoming an instrument in its own right. Elsewhere I don’t think I did enough to mix it up, and aside from the two tracks that have me vocalizing on them, it all gets a little same-y, with the base digital piano sound never changing much.

In the end, this was more of an unexpected sneeze than any kind of meaningful artistic statement — more something I released just to have something to release, because I still had it in my head that I needed a bunch of new gear before I could let myself go and start working on this big ambitious album I was picking away at in my head called THE ANGLE OF BEST DISTANCE.

Little did I know that thing would dog me for so long.

At least a few of the song titles are kind of interesting, lifted as they were from spam emails. And the cover is one of my favourites, thanks to Maya.

One thing that’s pretty bizarre: in 2008, when this blog was in its infancy, I typed “Tosteestostas” (the name of my imaginary record label/publishing company since forever) into Google just for fun to see what it would pull up. I found an entry on the blog for the CJAM show Sweet Static showing the top ten albums on the CJAM chart for May 25, 2006.

At number one was this CD.

I couldn’t believe it. I’d made it onto the CJAM charts a few times before, but I only gave a copy of this album to one DJ at the station. Not even the music director had it. I couldn’t imagine the instrumental piano songs being the sort of thing anyone would really be into, so I didn’t put any effort into spreading the CD around. How on earth did this of all things become the most played album at the station for a brief time in May of 2006, and my first time topping the charts?