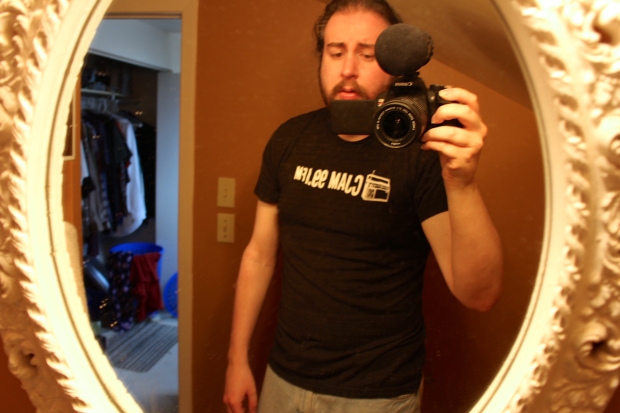 In the summer of 2010 I started thinking it might be fun to make a video at the end of each month. The idea was to keep track of what I was working on, and to give myself an excuse to ramble about whatever music-related thing was on my mind. Seemed like a good opportunity to teach myself about video editing while motivating myself to stay on track.

Actually, that’s a half-truth. I thought about doing this sort of thing as early as 2003. It just took me a very long time to get around to turning thought into action.

The videos were pretty rough at first. There were some violent volume spikes and the editing was choppy. I started to get the hang of things and evened out the audio issues pretty quick. A few videos in, I got the idea to chop up bits of old public domain films to break up the talking and have some fun with warping context. It’s funny what you can do with a tiny $200 video camera and free editing software — though by the time I was working on the fifth progress report I’d upgraded to some good-and-proper video editing software, since the free stuff was no longer compatible with my computer’s operating system.

After about a year of serious commitment to the cause, I started missing the odd month when it didn’t feel like I had enough to say to flesh out a worthwhile progress report. Around the two-year mark I stopped making these videos altogether.

I kept meaning to make up for lost time with an industrial-strength progress report video. That video gradually mutated into a sprawling homemade documentary, and I finished it in 2020 after a long gestation period.

My hope now is to get back into making video progress reports on a more relaxed schedule — maybe once every few months. These days I think that’s more realistic than making one every single month. It bothers me a little that something I enjoyed doing so much has been a non-factor on this blog for so long. I’m looking forward to bringing it back.

The most recent progress report is always at the top of this page (and then again, in proper chronological sequence, at the bottom). The original posts these videos were attached to can be found here.