The accidental band that rose from the still-vibrant embers of Papa Ghostface and became my main creative playground for a while. After about half a dozen personnel changes, we hit on a power trio lineup, it stuck, and what seemed at first like it was going to be a very informal excuse to make occasional random noise with some friends started to grow into something a lot more serious as we discovered our musical identity without really looking for it.

I’m still not sure how to describe the music we made. If I had to give it a name, maybe it would be something like “psychedelic post-emo grunge”.

In some ways, it was “Johnny West plus rhythm section”. This was very much a case of me using music as therapy and pouring all of my personal hangups into it — or at least it was once we settled in as a trio and things really took off. But even if I probably would have recorded most of these songs on my own, without Gord and Tyson it would have been a very different proposition. With those two guys to bounce off of, I took chances I never had before and really pushed myself as a guitarist.

As a lyricist, I was…not in a very mature place at the time. These were pretty dark days for me, and I used the improvised nature of most of the music and lyrics as an excuse to try and exorcise some demons. Some of that demonic residue came out sounding uncomfortably close to misogyny. I’m not proud of that, but I felt it was important to be honest about where my head was at, even if it wasn’t a very pretty place.

Had I known we were going to become a real band someday, I would have put some effort into coming up with a better, more meaningful name for us in the beginning. Then again, we were crazy teenagers at the time. So maybe Guys with Dicks was appropriate. It allowed me to turn a few album titles into goofy puns. So there’s that.

If the typical trajectory of a short-lived band is, “Record one album, play a bunch of live shows, and break up,” ours was more like, “Record many albums, play almost no live shows, and then break up.” Almost no one knew we existed while we were making music, and we never got the chance to play in an appropriate venue for people our own age who might have been into what we were doing. It’s impossible to say what kind of audience response we might have received, though I’ve always wondered.

There was a pretty decent amount of video footage shot of us as a band, both in and out of the studio. I wish I had access to that stuff now. I do have a few scraps, but the bulk of the footage was either recorded over years ago by others, or else the tapes have been lost or are collecting dust somewhere, waiting to be rediscovered someday (probably long after I’m gone).

At least we’ve got the music. I wouldn’t trade that for anything.

If you’re interested in knowing more about this stuff and hearing some of the songs, clicking on any of these cover images will lead you to a designated page for each album.

In the beginning, we weren’t a band as much as we were a series of accidental configurations of musicians that ended up recording together at my house. This was the first of several shifting lineups. There are some pretty druggy-sounding improvised songs here…which is funny, because I was the only person in the room who wasn’t high the day we recorded this album. “Marshmallow Shyster” and “All Together” are pretty catchy, rough edges and all. We would never play together in this form again, but all the pieces of the final GWD roster were already in place. I just didn’t know it at the time.

This is me goofing off with Tyson when no one else was around. Far from essential, but kind of fun. “Fish Head Blues” has a certain glistening something about it.

What would later become the “classic” GWD lineup is in place for the first time, with none of us inhabiting what our later roles would be. Gord and Tyson play various things with strings. I start out playing Fender Rhodes before deciding to sit back and unspool my brain while someone else does the musical heavy lifting for a change. We all sing. Again I was the only guy in the room who wasn’t high. This is an odd little album, with nary a conventional song in sight, but it’s always been a favourite of mine. That we could come up with so many different ideas while improvising over the course of one almost unbroken recording session is pretty impressive, I think. 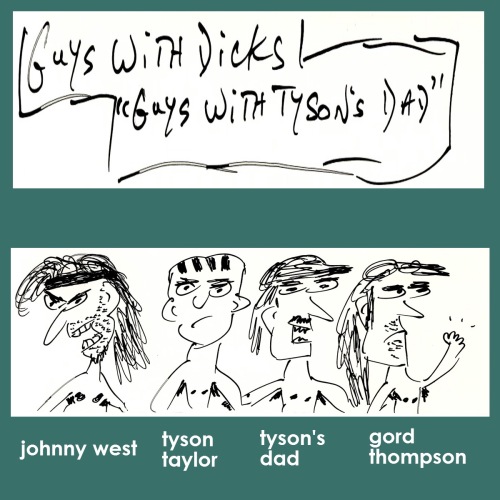 Tyson’s dad joins us for some pretty aimless jamming (hence the album title). Again I was the only person who wasn’t stoned. A few songs go some interesting places, but as marathon improv sessions go, this one can’t match the inspired dementia of SCOTCH TAPE SEX POT. I spent most of the time we were recording trying to find an effect I liked for my voice. I failed.

This is more like it. We became a conventional band for just the second time on record, with two electric guitars, bass, and drums. While we were rehearsing for the Air Jam (our high school’s version of a music-driven talent show), I took the opportunity to record us exploring and improvising. Not everything works, and the drum sound isn’t great, but Gord tears it up on guitar and I spin some twisted tales of bad people and bad sex. “It’s All Coming Back” has always cracked me up with its lengthy tale of a horny douchebag set to a seedy soundtrack. You can hear Andrew struggling to keep up with the music at times, but the three-way interplay between me, Gord, and Tyson is beginning to go some interesting places. 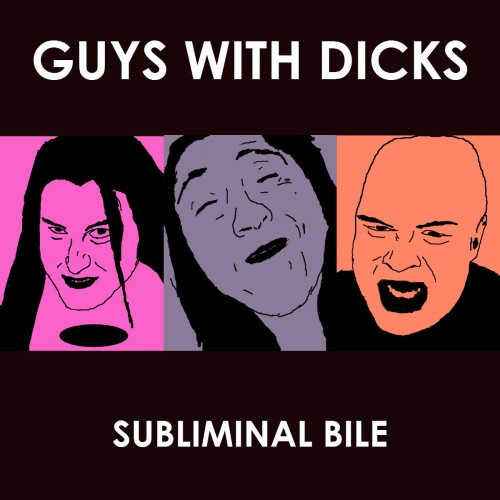 My love affair with slapback echo begins here. Andrew moved away, we were pared down to a trio, and everything snapped into place. Between grappling with my first job out of high school as a telemarketer and navigating a toxic long-distance relationship that was on the skids, I had a wealth of inspiration to draw on. I stopped role-playing and started singing as myself. It felt like I came into my own as a guitarist for the first time while making this album, and the connection with Gord and Tyson deepened to the point that it sometimes verged on musical telepathy. We stretched our improvisations out so much, only eight songs would fit on the CD. “Dance on My Brain” and “Vicodin” are the twin juggernauts around which everything else pivots, summarizing all of the album’s themes and accounting for almost half of the total runtime.

A more diverse and somewhat less cohesive album than SUBLIMINAL BILE. Some of our collective improvisations feel like they’re not quite sure where to go, and “Asphyxiate” never should have made it onto the album, but we hit more often than we miss. This time there’s room for something approaching a ballad in the shape of “Gutter Trash”, along with a mock game show introduction (“An Interlude”), the closest we ever came to straight-up punk rock (“We All Get Off”), and more lyrics about sex, drugs, and blood loss.

You could look at this as the third movement in a trilogy of breakup albums. It’s also more intense and a lot uglier than the two albums that came before. The slapback echo is still an omnipresent vocal effect, but the overall sound is much murkier. That felt appropriate, because I was a mess by the time we were recording these songs. With the exception of “We’re out of Tuna” — one of our best and wildest extended tracks — everything is shorter, sharper, and more compact, with the songs crawling toward conventional verse/chorus/verse structures. I wish I had better equipment and knew more about recording at the time so I could have done a better job of capturing this music in all its miserable glory. But maybe an album like this needs to be lo-fi.

What was supposed to be the beginning of the next full-length album instead became the band’s dying gasp. It doesn’t really sound like it was made by the same three teenage guys who knocked out SUBLIMINAL BILE in two nights a few months earlier. We were growing into a tighter, harder-edged unit even as we were falling apart, and the songs followed suit (“There Is No Us” features what might be the most intense vocal performance of my life). Based on this evidence, if we hadn’t broken up we would have become something resembling a bona fide grunge band. I took what I was going to put into this album and hammered it into BEAUTIFULLY STUPID instead. The rest, as they say, is spaghettini.

Our “greatest hits”? Not quite. This is a pretty tight collection of some of our more listener-friendly material from the last few albums, but in avoiding the more out-there songs it misses some of what we were all about. The crazy thing is I sent this around to record companies thinking they might hear something in it that interested them. To quote Sly Stone, “What was I thinkin’ in my head?” 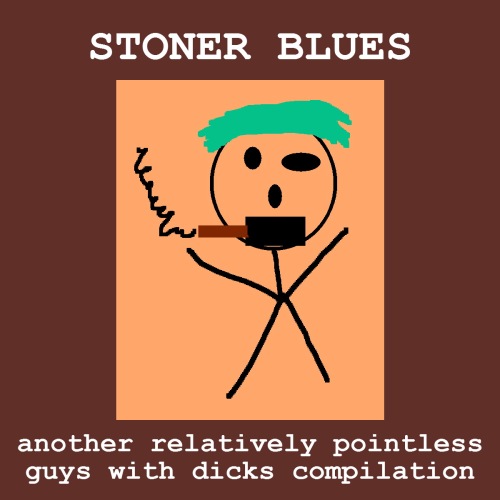 An attempt at collecting highlights from the early, lineup-shifting GWD days. As hit-and-miss as those albums were, it turns out there’s not enough space on one CD for all the best songs. Better to dig into the individual albums and take them on their own terms.

What little live footage there is of us doing our thing is all collected right here. “Something About Lies” obliterates the studio recording. “Mean It” doesn’t quite manage to do the same, but it does have some pretty tasty band interplay to recommend it.

Out-takes, live tracks, and a few solo demos. There’s more stuff in the vaults, but this is probably the best of what didn’t make it onto any of the official albums. The most amusing moment might be the oddball vocal chant/segue I slipped into the middle of the live set to explain why one song was excised. The SUBLIMINAL BILE and GOOD LUCK cast-offs are kind of interesting as well.

What the title says it is — a conversation Tyson and I recorded after smoking a joint circa GOOD LUCK IN THE NEXT LIFE. It’s more interesting than you’d expect given how toasted we were, and it offers some interesting insights into how we felt about our strange little band and the music we were making together.