This album is one big bloated mess — but it’s an entertaining mess. I think. Maybe.

For a long time I thought this was really patchy and inferior to SCREAMING NIPPLES in just about every way, with some good songs sharing space with some pretty lame ones. Now I find I like the whole thing quite a bit, patches and all, and even the lesser songs have their charms. There are about two and-a-half hours of music here, after all. So it was never going to be the most concise album anyway.

The first disc has some insanely long songs on it and works pretty well as a self-contained album, even though that isn’t what it is. The first part of Horsemouth takes a family member’s unsettling eating habits as inspiration, and Gord and I somehow manage to play tight guitar harmonies without either one of us having any idea what the other is doing. One of many moments of accidental musical telepathy we shared over the years. My main riff is pretty indebted to Neil Young. Eventually the song descends into cacophony that doesn’t take its cues from anything, with me trying to play “Amazing Grace” on slide guitar in the middle of all the dissonance.

It’s almost never-ending. Tyson (later our GWD cohort) once told me the first time he heard it he thought his life was going to end before the song did. That always cracked me up.

Edge of the Green Sea is all about building atmosphere and doing the slow burn, and there’s a bit of a deliberate Tom Waits influence there. I dig the slowed-down drum loop and Gord’s bullhorn guitar. This marks the moment I figured out how to record keyboards in stereo. No more mono digital piano tracks for me.

Protective Spleen gets off to a slow start, and for a while it seems like it might not go anywhere. My guitar work is some of the worst I ever recorded. But after a while the song starts to mutate into something pretty messed-up, complete with some nice distorted bass from Gord (it’s actually an acoustic bass he’s playing, using only the built-in pickup without any effects, though it sure doesn’t sound like it) and what has to be one of my most absurd vocal performances of all time as the character of “Mrs. Kafalakatee”.

Dead Bald Man Walking, on the other hand, is home to some of my better guitar playing from this period. Funny how much more adept I was with a slide than I was without one back then. There’s a jarring scream halfway through that comes after a bit of a lull, and it scared the bejeezus out of me when I was close to falling asleep, listening on headphones in bed minutes after mixing the CD. Suddenly my heart was in my throat and I wasn’t so close to sleep anymore. I think I can still taste that fear.

A few things lag on the first disc (Must Be Crazy is a less manic poor man’s sequel to “True Love in the Springtime”, and Love’s Like That has some fun lyrics but isn’t the most inspired PG tune), but not too badly.

The second disc is all over the place, and a lot less consistent.

Oyster Bay Nose Hair and Clogged Moments were recorded outside on my front lawn on a Saturday afternoon. I was running on almost no sleep. We set up at least one microphone to act as a sponge for ambient sound, pointing it at the street. You can hear cars passing by at some points, which is kind of neat. My guitar playing is again pretty lame, but Oyster Bay Nose Hair does have some weird singing from me and some nice acoustic bass work from Gord to recommend it.

I miss that rented bass. I kind of wish I still had it, now that I know a little bit about recording.

My Best Shirt apes the then-popular Pearl Jam version of “Last Kiss” for some dumb reason, though the lyrics are warped enough to inject something interesting into the stolen chord progression. “My silky chicken-head, I love you more than my best shirt,” goes the first line, and the climax of the song comes when I start wailing, “Prior to my circumcision, I was a model citizen!” The best part of the song might be the random intro, with Gord playing acoustic guitar while I torture a recorder.

Still, there are high points here, including my Bob Dylan impression on The Ballad of Bob and Marie and a less psychotic remake of “Tough Stuff” in the form of More Tough Stuff. Funny thing about that song — when I recorded the original “Tough Stuff” for the solo album DON’T TALK LIKE A BABY, Johnny Smith walked in on me just as I was getting started, and you can hear me tell him between the opening lines that I’m in the middle of something. On the version that shows up on this album, Johnny Smith walked in on me — in the middle of the song this time — and again I had to tell him I was recording.

Coincidence, or the interference of God herself? You be the judge.

There’s an odd part at the beginning of Horsemouth (part 2) where you hear me picking up my guitar and sitting down after hitting the record button and the patch cord hits the strings for a second, bending them, playing something I couldn’t yet do on purpose with my fingers. That track is another one we recorded outside. A neighbour stopped by and talked to me for a while during an instrumental section, and somehow I was able to keep playing and chat with him at the same time. Alas, I don’t think any of the conversation leaked into the mics.

Sympathy for the Monkey starts off as a weird snarling thing before segueing into a pretty decent recreation of “Sympathy for the Devil” (complete with “woo-woo” backing vocals), featuring new lyrics about genitals and constipation. Near the end Gord and I both play simultaneous guitar solos that have nothing to do with each other. Land of the Toads is a bit like a bedtime story gone very wrong, gradually descending into complete insanity, with both of us making some pretty twisted background noises as I spin a story about the travails of Naked Kool-Aid Man.

In the end, the real highlight of the second disc has to be I Couldn’t Write a Song If It Crawled up My Ass — a poignant tale of the Backstreet Boys’ ill-fated attempts at writing their own material, told from Nick Carter’s point of view.

The hidden track was supposed to be four or five minutes of dementia set to an electrified version of the opening riff from Oyster Bay Nose Hair, but I could only fit about thirty seconds on the CD with what little room I had left, forcing me to truncate all the good parts and losing all of the music in the process. Maybe I should have made it a triple CD instead. It’s too bad eighty-minute recordable CDs were still a year or two away from being easy to find anywhere. If they weren’t so elusive at the time I wouldn’t have had to chop out anything.

I had a fun idea for cover art I never got the chance to take beyond the brainstorming stage. The idea was this: Gord would be in bed with a terrified look on his face, pulling the covers up to his chin. I would be standing at the side of the bed (or maybe the foot of it), holding a large hardcover book that had the album title on the cover. The book would be open, with me preparing to read a chapter, smiling like a loving parent.

Had I known at the time how easy it would be to snap a picture of that and get it on a CD cover, I would have set the wheels in motion. Alas, it would be another four years before I would even think to try giving an album anything resembling proper packaging, and by then Papa Ghostface would be taking a very long nap. 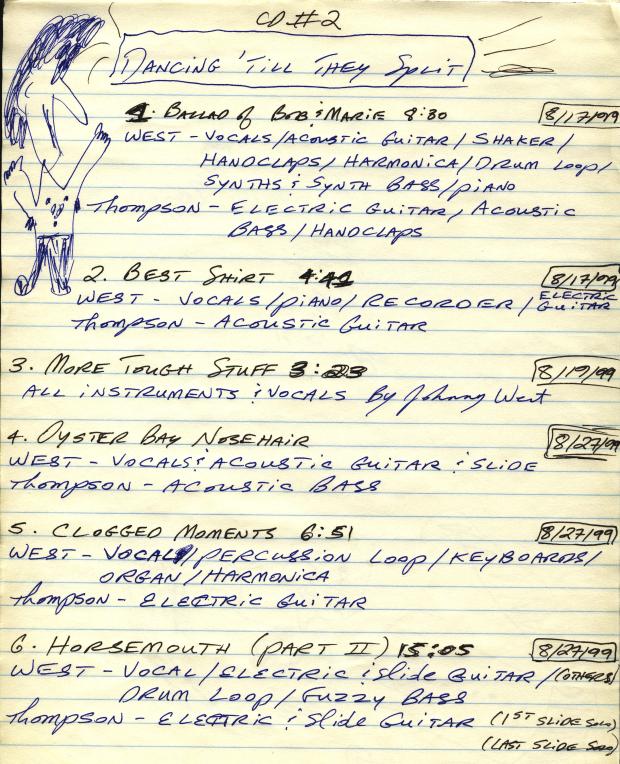