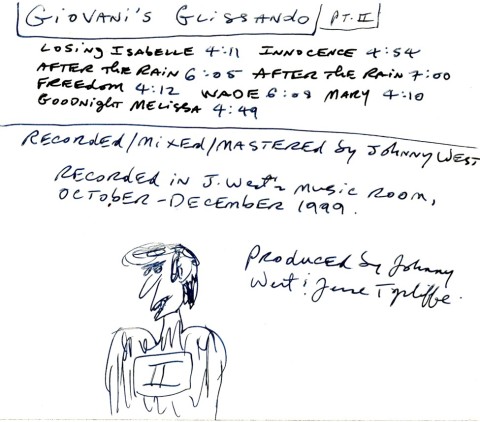 I went to high school with Jesse. He was a year ahead of me. I always kind of looked up to him, even if I was a little taller than he was. For the first few years we would say hi in the hall and that was about as far as it went.

When I was in grade eleven we ended up in the same drama class. We started to talk more. I gave him a copy of SONGS FOR DEAD SKIN when I was convinced it was the best thing I’d ever done (that lasted about two weeks) and wrote a bit of a letter to go along with it. He was surprised to learn I did what I did. I found out he made music too, and an odd collaborative relationship developed between us.

I thought some sort of Lennon/McCartney-like thing would transpire and we would have all kinds of musical adventures. That didn’t really happen. I became the guy who recorded Jesse’s songs, contributed piano and harmonies, and sometimes co-wrote the songs or provided music for him to write lyrics to. There was some collaborating going on, sure, but it wasn’t the democratic exchange of ideas and creative energy I was hoping for.

Jesse’s songwriting was much more entrenched in the pop world than mine. Sometimes he got frustrated that I wasn’t hanging out there with him. When he listened to my music he heard potentially radio-friendly songs I was slaughtering with weirdness. Jesse thought a song needed to be something that would appeal to the masses in order for it to have worth. I thought a song should be allowed to be whatever it wanted to be, with no consideration given to what anyone else might make of it.

We were coming from very different places. I made music for myself, didn’t think anyone else would ever be into it, didn’t really care, and had no big ideas about where it was going to take me. Jesse was much more ambitious. He wanted to get his music out there and ride that comet. He wanted to take over the world. He seemed to think it was only a matter of time, and he was prepared to use and walk over whoever he could to make it to the top. He had no qualms about telling you all of that, either.

Somehow we were able to meet in the middle and make music together pretty effortlessly. I think the creative dissonance was part of the reason it worked. He kept trying to pull me into more conventional waters. I kept trying to get him to see the appeal of spontaneity and having fun. If he won most of those battles and I ended up doing most of the bending and compromising, at least I got some good ideas out of it along the way.

If I even tried to tell the whole story of these recording sessions, or at least what I remember of them, I would end up writing a book. It was an interesting time in my life, and my brain is an out-of-control sponge like that.

I’ll just say some of my most inspired piano work from 1999 is on this album, particularly on Innocence and the second version of After the Rain. Some days Jesse would come over after school, we’d work on some of this stuff, and then Gord would come over an hour after he left and we’d record Papa Ghostface songs for what would become YOU’RE A NATION. It was pretty strange bouncing from one extreme to another.

Working more as a sideman/producer was a new experience for me. After a while I began to feel like I was being used. We patched things up pretty quick, at least for a while, but not before my anger inspired a vicious butcher of Goodnight Melissa.

I wish I still had that thing on a CD. It was pretty wild. I can’t believe Jesse thought it was funny when he heard it. I expected him to want to kill me.

Another one of my finest moments is gone forever — I only made two copies of this CD, and for one of them I accidentally left off Mary, which featured an insane piano solo in the middle of the song during which my fingers threatened to catch fire. Jesse took the CD that wasn’t missing anything and never made me a copy with that track on it.

The sadness, she is sad.

This album is predated by something called GIOVANNI’S SAMPLER (hence the “pt. II” on the insert). It had most of these tracks on it, plus a longer intro to Losing Isabelle (including all of the false start that fades in here), a catchy uptempo tune called Drops, an earlier version of Wade played on electric guitar instead of acoustic, my angry remix/re-imagining of Goodnight Melissa, and a few silly improvised skits.